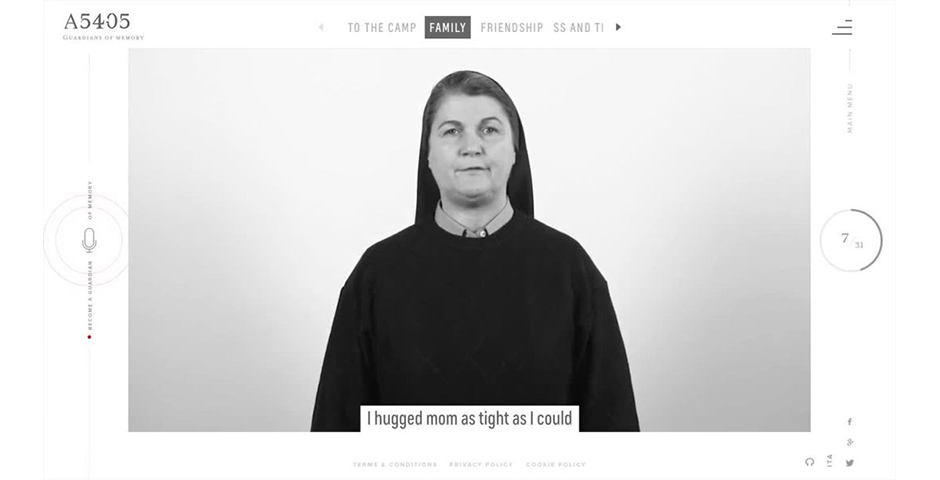 On the Holocaust Remembrance Day, we invited some people in a tattoo shop and proposed them one they couldn’t expect: the identification number of one of the last Auschwitz survivors, Nedo Fiano. Then we told them his story: having dedicated his life to remembering that horror to let us know about it, Nedo is now losing his memory. Thus, it is up to us to remember for him. Then we invited the audience to visit a website named after the number tattooed on Nedo’s arm: a5405.com Here, the users had the chance to keep Nedo’s memory alive interpreting his pieces of memory as if they were their own. a5405.com has become a virtual archive of Nedo’s memory, preserving for the future generations.

In a world in the grip of populism, fanaticism, and racial hatred, it is crucial to keep the Shoah memory alive among everybody and pass it on to the new generations. Such a chance came up with Nedo Fiano’s story. Not only a chance to raise awareness on the importance of remembering the Holocaust with an emotionally striking stunt, but to involve the users and make them an active part in preserving and perpetuating the Shoah facts, too. The inspiration came through the story itself: Nedo's 19-year-old nephew posted his grandfather's peculiar condition on Facebook the previous Holocaust Remembrance day, and we were so touched by it that we needed to communicate and embrace it somehow.

The responsibility of conveying Nedo's message was very big, and speaking of Shoah is always a very delicate matter. Being respectful with his story, his words (taken from his books and speeches), and his family was the first need. At the same time we knew we needed a powerful message and a strong and touching execution. We believe that we get past these obstacles with an ongoing dialogue with the two Associations and with the family. We got them involved in every single step of the creative process always respecting and considering their point of view.

When it comes to social causes and no budget in media it is very difficult to be sure of the succes of the project. But on a day that was already filled up with commemorative events, it captured the attention of the whole country with zero investment on media. It went viral in a few hours, being shared millions of times on social networks, magazines, and the major national newspapers. It ended up involving 140+ countries and millions of people. Many have decided to participate, interpreting Nedo’s memories on a5405.com. Among them Roberto Benigni, director and main actor of “Life Is Beautiful,” who had never endorsed any advertising, nor non-profit initiative before.

We meant to spread the message of the importance of the Shoah memory everywhere, especially among the new generations, with an effective but respectful language, given the enormity of this tragedy. I believe we succeeded in our goal.

Books and films are no longer enough for the Shoah topic: To actively engage the new generations, we need to tell the Holocaust with a new language that takes advantage of the potentials of the new media. Thus, as we had them visiting a5405.com and interpreting Nedo’s memories, the users could experience first-hand the feelings of the Holocaust and become guardians of a memory too precious to fade.