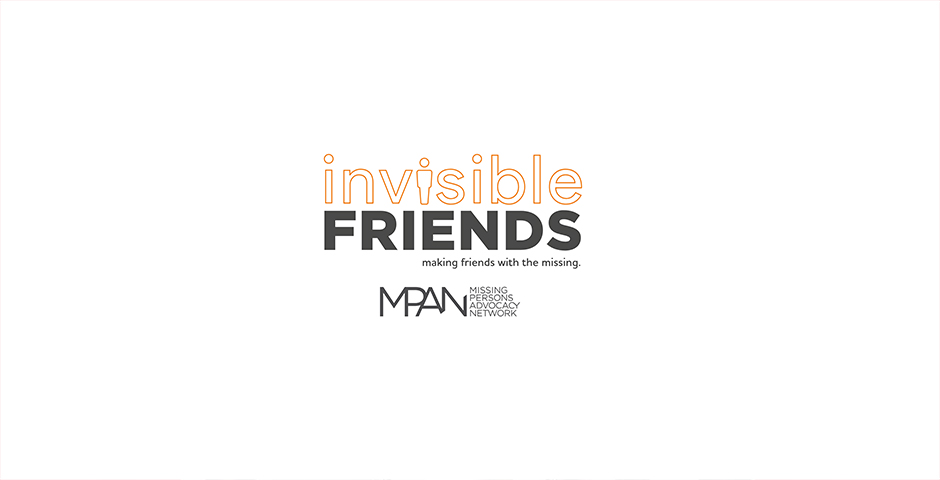 2019 Invisible Friends whiteGREY
See all the Webby For Good campaigns

It’s rare for a charity to be able to harness such a powerful piece of tech, and even rarer to be able to do so for free. - whiteGREY Team

The Missing Persons Advocacy Network provides support and guidance to the families and friends of missing people. To generate community engagement in long term missing persons’ cases, we created Facebook profiles for ten long term missing persons, that use Facebook’s inbuilt facial recognition to search for them. For the community to help in the search, they just had to become a friend.

There are over 500,000,000 photos and videos uploaded to the social network every day. So the more friends we could give these profiles, the wider the search net became. And because the reach extends to friends of friends, we could achieve a search party of millions of people, all with a few clicks.

Stumbling on the initial idea was an incredible ""a-ha"" moment. We had never worked on MPAN before but knew they were a well-loved pro-bono client. So we had a long, long brainstorm and got absolutely nowhere. We were naturally disappointed and got back to our regular work. Then a week later, out of the blue, we stumbled on an article saying that Facebook was changing the way that their auto-tagging technology would work. Now their facial recognition tech would automatically notify you if it recognised you in an image on your network, without having to be tagged.

As missing persons was fresh in our minds, it all clicked.

After selling the idea into the client, our first step was to do a deep dive into the technology and make the idea bulletproof. As a digital "hack" it was essential that the tech worked how we needed, as we wouldn’t be able to change the backend to suit our purpose.

Once this was confirmed, we liaised with MPAN to select ten families who were interested in having their missing loved ones be part of the campaign. Profiles were built and the campaign was launched with a dedicated website and media push asking the public to befriend the profiles.

The Cambridge Analytica privacy scandal occurred as we were selling in the idea to client. Because of it we almost killed the idea, not wanting MPAN linked with such a heated debate.
However finding a solution meant changing our thinking. While the discussion around Facebook was negative, there was still a lot of discussion. We realised that we could become the positive part of that conversation, using this controversial technology for an unquestionably good cause.

Because the idea was tied into that cultural debate we ended up with coverage on news sites all over the world, and a media reach that exceeded all expectations.

The reach of the campaign surpassed our expectations, gaining media coverage in over 35 countries.

The profiles have over 11,000 friends actively searching for them, which to the second degree translates to a network of millions.

And MPAN had their most successful year on record, with a raft of new offers of financial support appearing from both the public and private sectors.

The campaign relies on Facebook’s powerful facial recognition, freely used on every profile on the social network.

Facebook proudly boasts that their facial recognition is 98% accurate, better even than the FBI’s. It’s rare for a charity to be able to harness such a powerful piece of tech, and even rarer to be able to do so for free.

Facebook as a medium was absolutely crucial to the idea. It’s only because of the way that they chose to integrate facial recognition into the platform that this idea became possible, and without the friendship structure of social networking it wouldn’t be able to have such a massive digital reach.

About the Experimental & Innovation category

The use and/or implementation of groundbreaking mobile technology or unconventional applications of mobile technology in mobile sites, apps, and environmental situations. Entries in this category may be theoretical, pre-production technologies pushing the boundaries and definitions of handheld mobile device experiences.