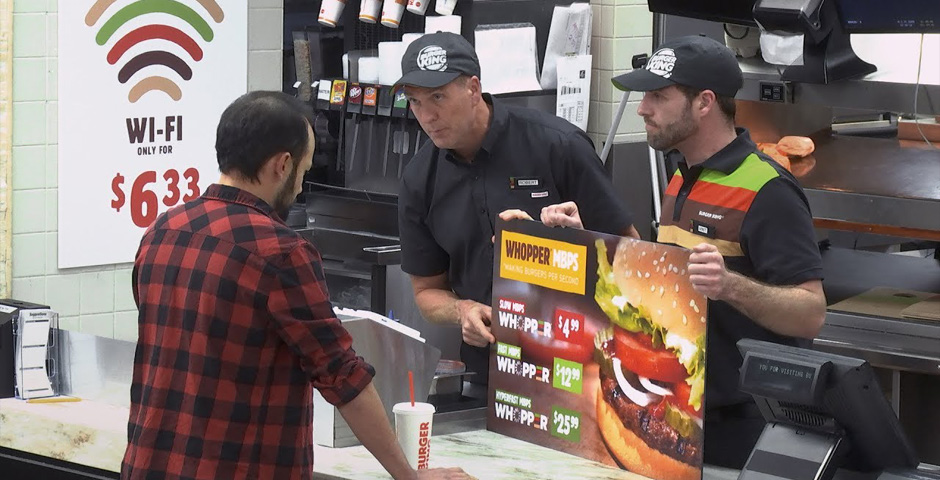 The repeal of Net Neutrality was a hot button topic in the US. The FCC granted Internet providers the power to control speeds and data on the Internet, having the ability to discriminate or charge differently by user, platform, etc.

The issue was complex, and most people didn’t understand the consequences of the repeal.

But what do people understand? A Whopper. We used the relatable process of ordering a Whopper to make an otherwise complicated subject suddenly easy to understand. Dramatizing what could happen if net neutrality were repealed through a demonstration of fast and slow lane Whoppers, we made the subject clearer and taught the country what NN would actually mean in their lives.

The repeal of Net Neutrality was one of the most complicated issues happening in the US. The biggest problem was that most people couldn’t really understand what it meant. It basically entailed that Internet Service Providers could control all the data on the Internet and charge differently depending on many variables. So we decided to explain all this complicated information by visualizing it in terms anyone could understand: A Whopper burger. We turned the data from a complex topic into a didactic and fun way that was easier to comprehend. By making this data clear, we helped save all the data.

The “a-ha” moment was actually having the idea of using a Whopper to explain Net Neutrality, using our restaurant’s service and products as a metaphor, recreating the scenarios that people will experience with the repeal of Net Neutrality.

Cashiers explained to real guests how the new policy was affecting speeds and service, how the access to the Whopper had been delayed on purpose to promote other products, or that if they wanted faster service they’d have to pay a premium to access slow, fast, or hyper fast MBPS (Making Burgers Per Second).

With all the real reactions we then created our online film that we released just weeks before the voting for the repeal of Net Neutrality started.

As a QSR brand, Burger King serves a cross section of the American public: 84% of adults report visiting a category competitor in the past month. In addition, there’s a greater likelihood of Millennials and Generation Z to visit the category.

Open Internet is a topic we knew had relevancy to everyone. 79% of Americans reported they were against the repeal of Net Neutrality. It appeals to the younger generation who are more inclined to seek out brands which involved themselves in social issues to make positive changes. We partnered with change.org to direct viewers to sign a petition to be sent to Congress voicing their support to prevent the repeal.

The biggest issue here was to act fast. This was a topical conversation, the voting in the Senate was happening soon and we couldn’t lose the right timing. The repeal of Net Neutrality was imminent and we had to launch our project before that. So, in a really short period of time we had to partner with the client to jump in the conversation and in a really short period of time film it, edit it, and post it.

It went beyond our wildest expectations. The idea got +2.3 million signatures to protect Net Neutrality on change.org. And on May 18, 2018, Senator Maria Cantwell mentioned the campaign on the US Senate as a good example to explain the effect of repealing net Neutrality. Beyond this, many Congressmen and Senators celebrated and endorsed the campaign and even Hacktivist group Anonymous supported the brand for the first time ever.

Our strategy was to focus on Social Media. We published it on all the social media platforms from the brand, as well as a thread on Reddit where the biggest community of active Net Neutrality supporters lived.

To discuss an Internet issue, we decided to focus all of our communication on the Internet itself. We published it on all the social media platforms from the brand, as well as a thread on Reddit where the biggest community of active Net Neutrality supporters lived.

The project went beyond our expectations. Not only did it help generate a social change by helping protect Net Neutrality, but also for the brand, that got a lot of recognition because of the initiative:

For us, it’s not only about technology, it’s all about the idea, and using the right channel/media to talk with the people you want to impact.