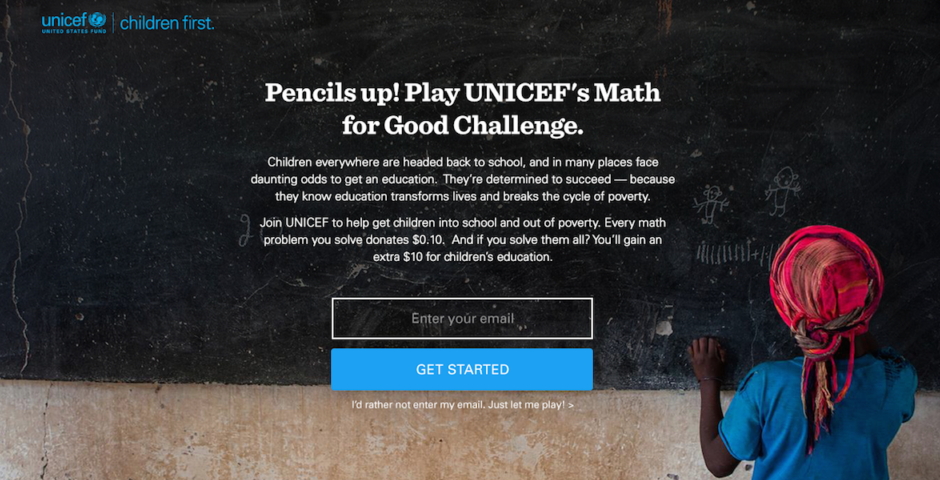 Using the power of addictive game play to engage and empower our audience to take action, UNICEF and Blue State Digital raised awareness for the millions of children worldwide who face daunting odds in getting the education they deserve. The UNICEF Math for Good Challenge provided our community with the opportunity to help get children into school and out of poverty. Using a minisite, we gave them one minute to solve nine mathematical questions—every problem the user solved correctly would unlock a $0.25 gift to UNICEF, with an additional one-time $5 bonus for answering all nine math problems correctly.

Our challenge was to find new ways to drive exponential long-term growth for UNICEF's audience. We took a two-pronged approach: create diverse storytelling and engagement campaigns (beyond simple fundraising asks) and work towards engaging supporters (new and old) in individualized journeys based on their interests and behaviors.

With the Math for Good Challenge, we engaged supporters with a campaign that was addictive; it was thought-provoking; it was fun. But most importantly, it raised critical awareness about a child’s right to education, and funds to support UNICEF in their efforts to ensure every child receives exactly that.

We made the gameplay sticky by giving players the opportunity to play again as soon as they completed the game, and by keeping an ongoing tally of all the dollars they unlocked thanks to gameplay. We also encouraged widespread social sharing by giving users the opportunity to easily share how much they’d raised with a cheeky social share graphic and Facebook/Twitter share function. It was talked about, it was shared, it was played and played and played again. People got hooked—we received one report from a young UNICEF supporter who played the game so many times she’d unlocked over $122 by herself.
We had about 200,000 submissions which raised serious dollars for UNICEF.

We and UNICEF believe that every child, no matter where they live, deserves a safe and healthy childhood.