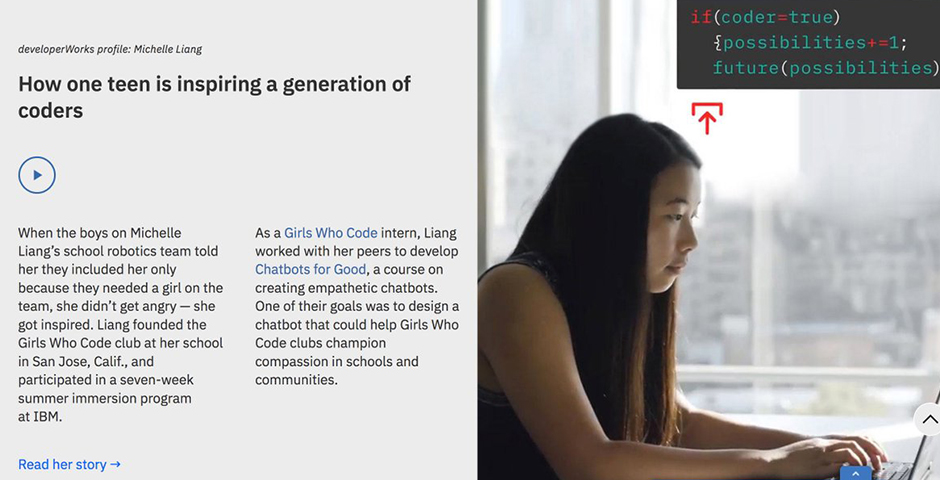 IBM developed a series called C0d3rs (Coders) with Vox Media, to celebrate young female coders and highlight our education partnerships with Girls Who Code, which was created to get young females coding, and through IBM's P-Tech program, which is a new education model co-developed by IBM, working together with educators, policymakers, and elected officials to encourage the next generation to get into the technology field.

As women in the computer science field still face scrutiny and are discouraged by things like the controversial memo leaked by a Google employee last summer, IBM, a leader for over 100 years in progressive thinking, stands up to celebrate the women of tech.

Supporting females who code has always been in our DNA, and we’re on a mission to help elevate another 1 million girls who code by 2020. We want to inspire the next generation of coders and set an example in the market.

There were essenitally no concerns, except that, because there are so few female coders in the world, finding the right stories to tell took a lot of research and searching.

The most rewarding aspect was discovering all of the amazing young female coders around the world who are taking a male-dominated world head on. They are from diverse backgrounds, but all had similar aspirations and dreams to change the norm.

The content began in November 2017 and was among our top performing assets with 100% positive social sentiment. We received millions of views across native Facebook, YouTube, and IBM’s DeveloperWorks site, which gives coders an opportunity to expand their knowledge of coding.

The efforts have increased the interest levels of female coders who participated in the program from 12% to remarkably 71%. We saw a 48% increase over average time spent, and 9% higher than average completion rate.

But more importantly, our program is expanding to over 80 schools next year and more empowered female coders are hitting the market to drive change in the computer science industry.

The "a-ha" moment was when we first started to speak to potential heroes for our video. We weren't sure what kinds of personalities we would be talking to. When we started to ask questions and heard them speak, we looked at each other and realized what a great stories we potenitally had. The challenge became telling them in the best way possible.

Video was most crucial for us. We wanted to dive deeper into each coder's backstory: where they live, what they like doing, what their aspirations are—and felt making mini films was the best way to tell each story.

The most significant challenge was to tell a story that served each of our heroes in the best possible way. This was about finding and telling the truth, and not getting cute with the way it was executed.

Because we are IBM, we are at the forefront of so many different kinds of techologies, like AI, blockchain, cloud... We want to use our knowledge and know-how to not only educate the next generation of coders, but also apply our technologies to help solve some of the world's problems.