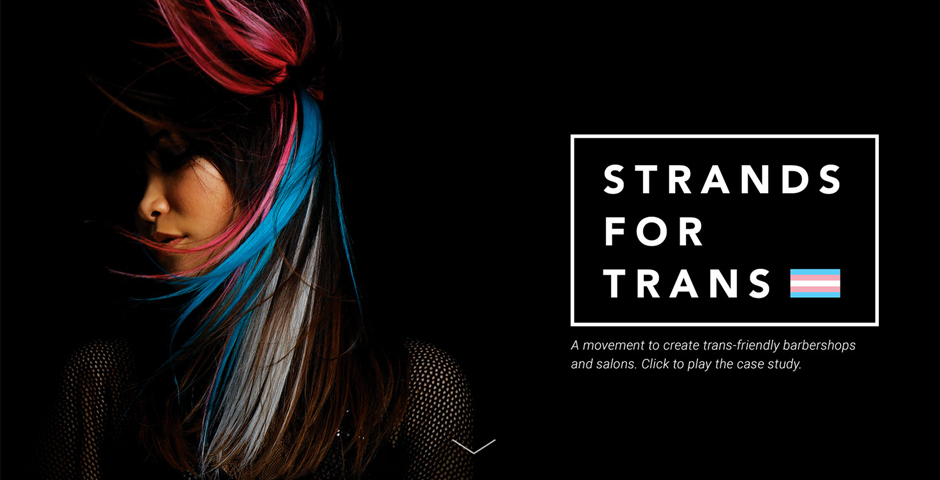 “Strands For Trans” is the movement to create trans-friendly barbershops and salons. Started by a small NYC barbershop, Barba Men’s Grooming Boutique, the campaign galvanized the LGBTQ community and other seekers of equality during Pride 2017, by bringing attention to the discrimination transgender individuals often face when getting a haircut. Inspired by the pink, white, and blue colors of the trans flag, the campaign led barbershops and salons across the country to sign up as a safe space on the first digital registry. “Strands For Trans” fought the mighty foe of discrimination with a small budget and a big heart.

Barba is located in Chelsea, New York City, the birthplace of the gay rights movement. Owner Xavier Cruz distinguishes Barba not just by the quality of its services, but by its commitment to the LGBTQ community it serves. When we discovered a growing pattern of news headlines about transgender discrimination at barbershops, we knew that we needed to take a stand and ignite change.

The biggest concern in starting a nationwide movement out of a small business was the budget. Our solution: get scrappy. We connected Barba with FLUX, a division of the AIDS Healthcare Foundation (AHF) to secure a small $10,000 donation and stretched every last penny. We enlisted a small, volunteer army of industry pros to donate their expertise, from models and voice talent, to directors and photographers, to post production and PR. Most humbling, fashion icon Marc Jacobs joined the cause. Not only did he get his hair styled in “Stands For Trans” signature pink, white, and blue look, he lent his celebrity to rally support with the press and his millions of Instagram and Facebook followers.

By far, the best part of this project was watching our “Strands For Trans” map go from just one single pin for Barba to a wide spattering of pink, white, and blue, all over the country. Within two weeks, we counted trans-friendly barbershops and salons in all 50 states—even the red ones. Nearly a year later, we continue to feel pride as this network of safe spaces has taken a life of its own, and continues to grow across North America and into Europe.

We designed an incredibly easy way for any barbershop or salon owner to designate their business as a safe space in the world’s first digital registry. As the saying goes, “If you build it, they will come.” And thankfully, hundreds did. What started as an initiative to help the trans community feel welcome and accepted, sparked a trend of inclusivity that spread further and faster than Barba could have ever imagined.

About the Best Social Community Building and Engagement category

Best, most innovative, and effective or creative use of a social community building-and-engagement campaign.