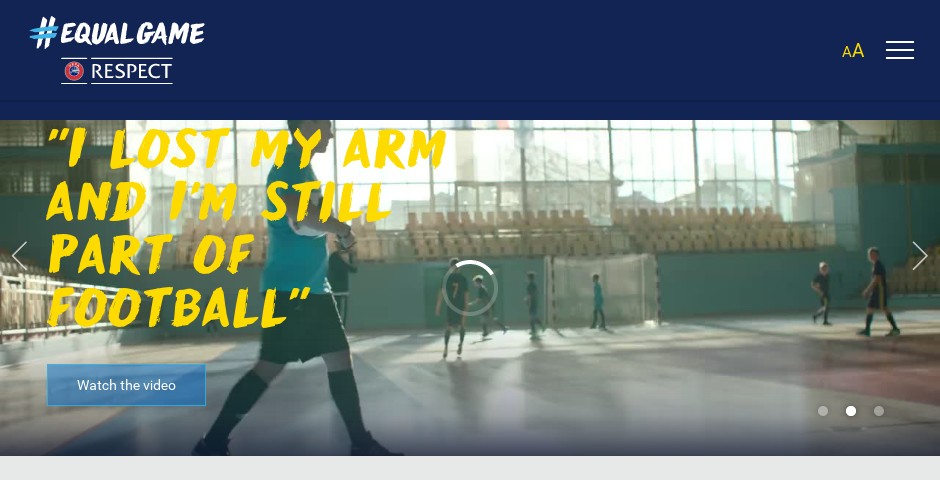 How did it come to be–what was the breakthrough moment?

As a leading football organisation across Europe, UEFA wanted to better understand fans’ concerns to ensure their experience of and involvement in the game at all levels could improve. Following continental-wide research and fan surveys, UEFA learned that supporters wanted football organisations to positively address and enhance diversity and inclusion in the game.
UEFA therefore launched the new #EqualGame campaign to be a proactive voice in football leading the inclusion conversation and set new high standards for diversity/equality practices that all European national and club football organisations can replicate.
#EqualGame’s objective was to creatively engage fans to promote diversity, stimulate positive discussions on UEFA’s digital channels and encourage players/fans to be active advocates of inclusion.

What was the intended real-world impact?

The team behind UEFA’s #EqualGame campaign is extremely proud of its success and the immediate positive results it achieved to raise diversity awareness across European football. In its first year, #EqualGame has helped to drive forward the inclusion agenda with practical tools and programmes that clubs, national associations and many other football bodies have embraced with great results. The response and engagement from elite and grassroots players and fans is overwhelming – helping us to generate and showcase compelling stories that has made our inclusion and diversity promotion appealing, powerful and even fun.
It was important #EqualGame delivered quantifiable results that had a positive meaningful impact on everyone across European football, and in particular those communities where the inclusion message needs to resonate most powerfully. In that sense, we are very pleased with the tangible results that helped the campaign get shortlisted for this award. Through the relevant use of high-profile football ambassadors, engaging film and online content and powerful, emotionally-driven storytelling, we are delighted that the campaign stimulated, for example, a measurable surge of interest in women’s football and walking football. The campaign is also responsible for advancing corporate governance best practice within football organisations, including applying employment equality policies to ensure gender parity for salaries and bonuses.

Your biggest challenge to achieving your goals?

The greatest challenge to launching and activating such a campaign, is to ensure it can make a tangible positive difference to fans, the broader communities UEFA serves and all our stakeholders. We wanted #EqualGame to go beyond diversity and inclusion promotion – and have a real impact on people’s lives.

That’s why #EqualGame programmes and initiatives get into the heart of the community – helping to instigate positive cultural change and bring people from different parts of society together. Sport should be for everyone so we have a responsibility to ensure it is open and accessible for all with more players and fans from every background – ultimately helping to create a more healthy and harmonious community.

What was your proudest moment?

A very proud moment would be the fact that a pharmaceutical company, inspired by a young wheelchair-using boy called Jane who featured in the #EqualGame campaign, has decided to significantly lower the price for expensive spinal muscular atrophy medication that Jane and six other patients from Macedonia have to take on a daily basis. The campaign has helped empower the patients and the connective power of football has enabled all these families to improve the quality of their lives.

Sites that promote a company or organization’s mission to improve civil and social life.