Price on Our Lives | The Webby Awards 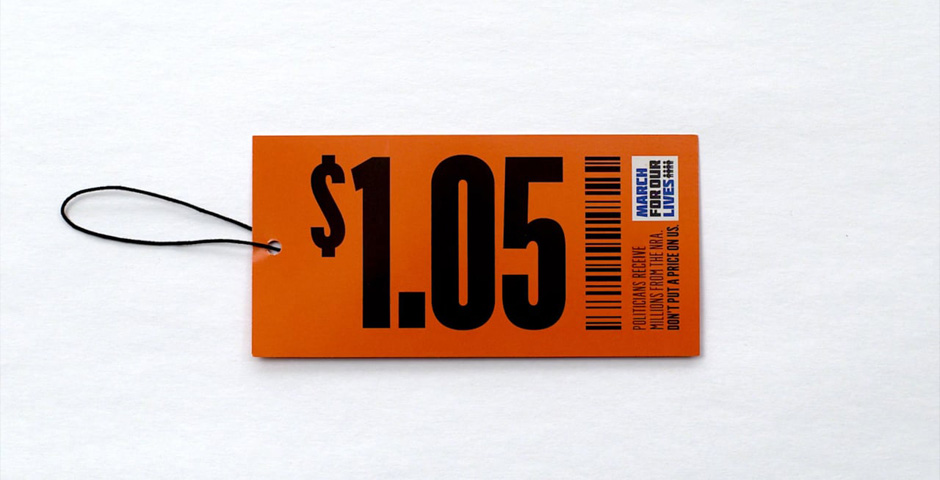 Technology enables the sharing of a message that important movements can rally behind. But without the right message, it doesn’t matter what technology you have available, or how much money and influence you put behind it. - McCann New York Team

We created a simple price tag with a staggering statistic, $1.05: the price of human life based on the millions of dollars politicians take from the National Rifle Association (Marco Rubio accepted $3.3 million dollars from the NRA and there are 3.14 million students in Florida). Ahead of the March For Our Lives, student activists shared the price tags on social media, and news outlets were captivated by the sea of orange among the millions of people at events across the country. The price tag turned into a fundraising tool, and the movement mobilized behind our message as it seeks to end the gun violence epidemic in America.

After the mass shooting at a high school in Parkland, Florida, a few survivors spoke up to demand change. They organized the March For Our Lives rally which attracted millions and started a movement. We created the $1.05 price tags as a communication tool to hit politicians where it hurt the most—their money. NRA campaign contributions are the sole reason politicians in America refuse to enact any common sense gun control legislation, so we decided that changing the equation between guns, money, and politics was the most effective way to enact change.

The moment we learned the price of one student life based on the money their representative in Congress took from the NRA. This is a staggering, heart-wrenching calculation. Whether it’s a large or small number doesn’t matter, when there is a dollar amount a politician will accept in exchange for your life, politics become personal for every person in America.

The orange $1.05 price tag is simple and bold with a powerful message, we just needed to get it into the world. With the help of a few young voices in the March For Our Lives movement, the price tag went viral on social media. The march on Washington, D.C., was a sea of orange, with gun control activists and allies sporting the price tag on their wrists, including celebrities and March For Our Lives organizers as they gave powerful speeches on stage.

Time was always the issue. The shooting in Parkland, Florida, happened on February 14th, and the March For Our Lives protest was scheduled for March 24th. That’s just over a month to design, produce, and distribute the most powerful symbol the gun control movement has ever seen. Navigating political issues is always tricky, especially for a large organization. We made a strategic decision to go after money and take a firm stand against politicians not just from one party, but who continue to put their campaign contributions ahead of their constituents’ lives.

The real-world impact far exceeded our expectations. We made a little orange price tag bracelet with a dollar amount on it. It not only took turned the crowds marching into a sea of orange, it was the fixation of national media, worn by countless celebrities and activists on stage. We even created price tags for other states, and the price tag became a fundraising tool as people were allowed to “buy back” their politicians and donate to March For Our Lives. Our little price tag became a universal symbol for gun reform legislation in a country that desperately needs it.

Social media allowed us to spread the message of the $1.05 price tags ahead of the March For Our Lives protest in Washington, D.C., as well as around the country. At the event, we distributed the price tag bracelets among celebrities, activists, and those who didn’t print at home, and visibility/awareness increased dramatically. The campaign was equal parts viral social media online and simple printed media offline; together they were the perfect combination of tech/media.

There is no shortage of creative work that aims to provoke the gun control debate into action. Instead of focusing on tragedy or danger, we took a more pointed approach by focusing on the money that keeps politicians from regulating guns, and that’s why it resonated. We’ve begun to shine the spotlight on these hypocritical politicians who should be voted out of office, and actual legislation has been introduced in many states—including Florida, Vermont, and New Jersey, among others—as a direct result of our efforts in the wake of the Parkland shooting. That’s quite beyond the expectations of a little gun control awareness activation.

Technology enables the sharing of a message that important movements can rally behind. But without the right message, it doesn’t matter what technology you have available, or how much money and influence you put behind it. Technology is a catalyst to good ideas, and its power should be wielded with the right creative communication to give the ordinary masses the ability to take on craven politicians, opaque corporations, and despotic regimes.