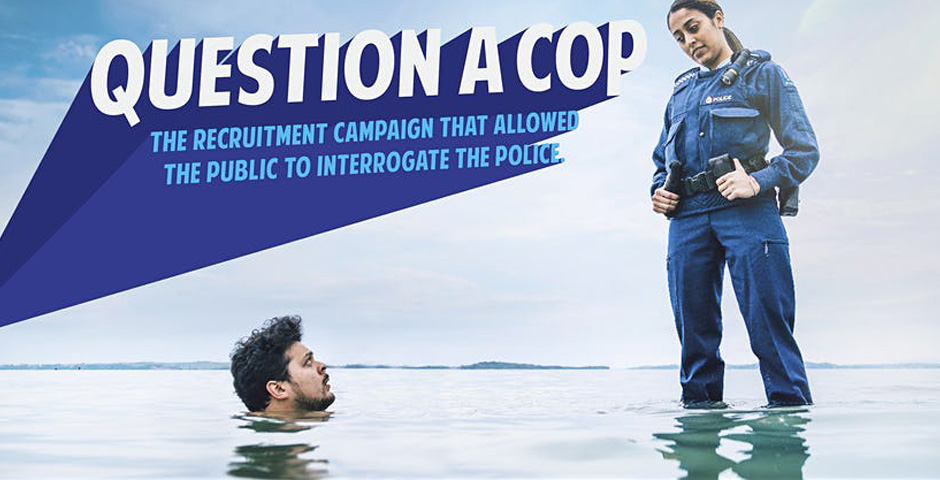 We discovered data that identified a common theme that was causing a block in the recruitment funnel. Many people had questions about joining that were going unanswered. Causing them to leave their application unfinished. Especially those in our minority target, whose conversations with the Police often felt like an interrogation.

So, we created a campaign that turned the tables and allowed the public to question the cops.

Police want their population to match that of the fast-growing diversity in New Zealand. They recognise the value of having diverse skills.

When people are facing the Police, they tend to use their subconscious and look for someone who can relate to their situation. Diversity is appreciating what makes someone different, empowering this difference whether it is gender, ethnicity, height, sexual orientation, stature, or language.

So, we needed to attract new recruits (1,800 cops over three years) with a focus on increasing gender balance and ethnicity to reflect our country’s population. To do this we needed high-quality applicants– with an increased focus on Māori and females.

"Firstly, we needed to gather real questions that potential recruits wanted to be answered, these came from the New Zealand Police’s social media accounts and the most searched questions on Google.

We then had 70 diverse officers not only play roles in the recruitment film but even more to answer real questions on “Chat Cops” our new interactive platform, that encouraged a bit of friendly interrogation, where you could ask real officers anything."

We needed to give our audience as many ways to “Question a cop” as possible.

So we went to where our target was, and followed up the recruitment film and “ChatCops” with a retargeting campaign on Instagram and social media, gave them live answers to convert those who still had questions and lead them to the police recruitment page.

The reverse questioning continued at pop-up police stations, on Maori radio, and across TV talk shows, with questions submitted by the public on social and answered live on air.

"Question a cop” has been the most successful recruitment campaign ever for the New Zealand Police. It has seen a 773% increase in diverse profiles, which was 30% above recruitment targets. And most importantly applications for Māori and women were up in record numbers.