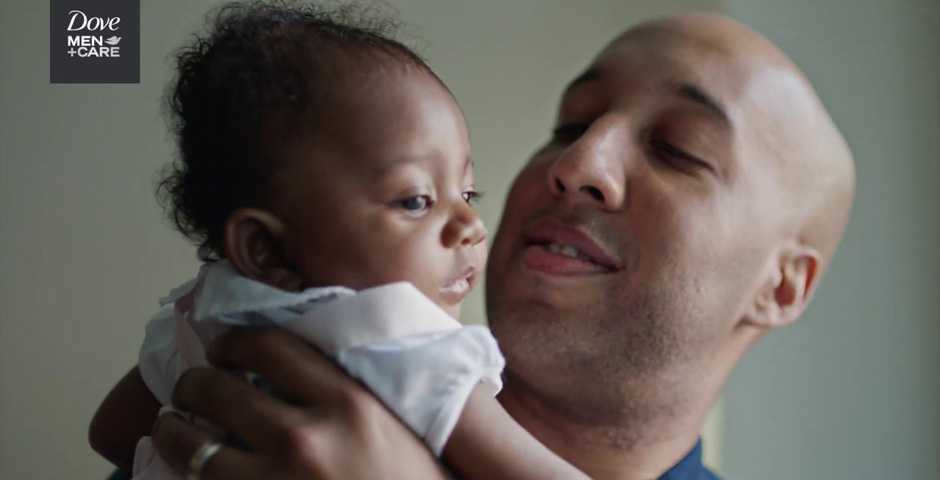 When dads take the time to care and get involved in their child’s life early on, it has a positive impact on family, community, and careers. The problem is, most companies don’t offer paternity leave. And if they do, most new dads don’t take it because of the stigma associated.

Armed with an updated paternity policy affecting 550,000 Unilever employees, Dove Men+Care gave dads around the world a platform to share advice on the art of dadding with the next generation of fathers using #DearFutureDads. On Father’s Day, our film became a call-to-action both in advocating for other companies to improve their paternity leave policy, and for fathers everywhere to break old stereotypes.

Dove Men+Care was looking to redefine modern masculinity for a generation of men grappling with their identity.

The campaign was born through research unveiling how differently millennial men define themselves compared to previous generations. One thing that surfaced was their difficulties juggling work and being a good father.

When it came to paternity leave, Dove Men+Care couldn’t ignore the grim statistics: less than 1 in 5 men in the U.S. are offered paid paternity leave.

Dear Future Dads sought to challenge this reality by reinventing the archetype of modern masculinity and getting fathers talking about this systemic issue, sharing their stories, and breaking the stigma.

When one Dad said that the only time he had ever felt love in his life was when his son ran up to him and hugged him, it became clear that this was more than a project. This was a platform that invited men to open up emotionally, to share the triumphs and tribulations of fatherhood.

Though the stats were clear, the “a-ha moment” was when we realized that the topic of conversation was often overlooked. And, that our goal was to create meaningful discussion in mainstream media about a subject that isn’t prioritized, but is beneficial to all.

Dove Men+Care partnered with global gender equity NGO, Promundo, to commission a new study to validate the limited access dads currently have to paid leave, the societal stereotypes associated with taking this time off, and the desire and willingness men have to spend more time to care for their newborn.

Once the creative idea was sold in, and our idea validated, we knew that in order to give this program the most momentum, Unilever itself had to agree to lead with action and adopt a progressive parental leave policy for all of their employees affecting 550,000 employees worldwide.

This project about redefining what masculinity means today began months before toxic masculinity was a household phrase or the #metoo movement had even begun.

We did not know that we would be part of a much bigger conversation and navigating the water proved difficult at times.

Despite the spiraling conversations and revelations of bad men being uncovered, we stuck to our original message of showing the hope of what real masculinity stood for, and showed the good guys through the power of fatherly care.

We set out to drive conversation around paternity leave. To give real fathers a platform to share advice with expecting dads. We didn’t expect that Unilever, a company of over 550,000 would use our campaign to change their own policy. Which in turn created a ripple effect where other companies like Starbucks, Lowe’s and Wal-Mart, followed suit.

#DearFutureDads has garnered 1.5 MM impressions, across all platforms, and has been used 200K+ times – leading the conversation about parental leave and the importance of fatherhood. Ladders, Quartz, and Good Men Project all cited our research during different relevant studies of their own. We were also featured on both NBC and CNN.

More than a hashtag, #DearFutureDads was explicitly an invitation for fathers from across the globe to share their advice, ask questions, and relate over experiences on Twitter. The platform offered men an opportunity to connect with other individuals going through the rollercoaster of early fatherhood, while also bringing this conversation into a very public arena. This built up universal awareness of these struggles and successes, and allowed anyone to share their support.

Due to the ability for topics to catch fire and trend globally on Twitter, it was the perfect forum for fathers, from every walk of life, to sound off on the issue of parental leave and their struggles juggling work and fatherhood.

Twitter, which can often be a toxic and uninviting place to share personal stories and feelings, became a place for fathers to support others and be heard. The platform allowed us to achieve a global reach, while raising awareness and injecting statistical evidence concerning the importance of these reforms for families and our future.

During the course of our campaign, we injected a humanistic moment and rallying call into an all too often vitriolic space.

We knew this was an important issue to confront, but getting men to talk about their feelings publicly with other men was always going to be tough.

So, seeing just how many men and women rallied around the conversation was inspiring. Through our campaign, we were able to encourage everyone from Alex Ohanian to our own next door neighbors to share their stories.

But what truly defied our expectations was how one brand could lead the charge, change their own policy, and create a conversation that led to a cultural ripple effect felt globally. #DearFutureMen changed the stigma around taking paternity leave, and paved the way for other companies to change outdated paternity policies.

It goes without saying that technology is always evolving, for us, it’s the point of access to create meaningful work and change. The way we use technology, is to democratize content and create a two-way conversation between brand and consumer. We’re able to glean meaningful insights from user behaviors and interactions to then create connections and conversations relevant to them in real time.

The continued advancement and use of technology has such great potential for meaningful interactions with one another that can drive meaningful action and change in the real world.

The way we use technology, is to democratize content and create a two-way conversation between brand and consumer. - Virtue Team

Digital campaigns showcasing a company's commitment to encouraging community growth and development, and to activities and programs that benefit the environment, consumers, employees, and the public.