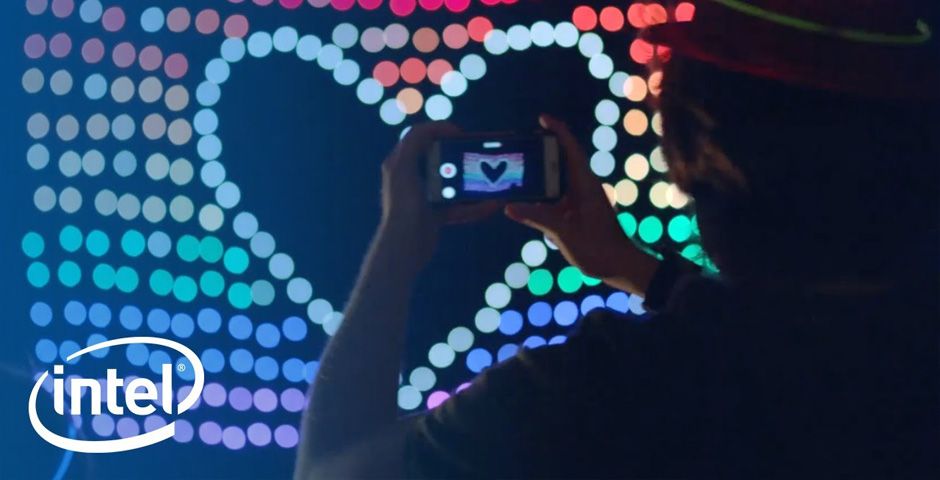 To celebrate Pride 2018, we showed Intel’s home city of Folsom, CA, (and the world) what happens when we put Pride Above All. We worked with Intel’s cutting-edge drone team, deploying 300 drones to create same-sex symbols, the Pride flag and custom illustrations that celebrated Intel's LGBTQ workforce. The performance and the film were more than an entertainment spectacle – it was a tribute to our LGBTQ community and heralded Intel’s commitment to inclusion and equality.

The world hasn’t always been welcoming to the LGBTQ community. But more than two decades ago, Intel established an affinity group for LGBTQ employees and allies. The group has since helped usher in domestic partner benefits at the company and the addition of gender identity to Intel's non-discrimination policy. Intel wanted to celebrate and champion its LGBTQ workforce and make a statement about its value to the company’s community.

The “a-ha” moment came as hundreds of employees and their extended families showed up to not only view the spectacle but reflect on their decades of progress. From living in secrecy to living out in the open, to now professing their pride as if shouting from a mountaintop. The “a-has” came in all forms, from giddy laughter, to tears, to cheers of joy.

The backbone of the film was always going to be the Intel employees themselves. Our first task was to find LGBTQ members of the Intel workforce with the best stories to tell. We also had to coordinate with the world-class Intel drone team to find the perfect location to accommodate their technical needs.

YES! Originally we were supposed to film the whole show in San Francisco, over the Golden Gate Bridge, on the weekend of SF Pride. But 5 days before the shoot our weather forecasters told us the wind in SF would be too strong for the drones to fly in, so we had to move the entire shoot inland to Intel's Folsom Headquarters. This unexpected challenge became a huge positive, by allowing us to bring an exciting event to the entire Intel HQ family, and the Folsom community at-large.

Visibility is incredibly important when fighting for equality and inclusivity. There's a lot of activity around Pride, so cutting through is hard. Being featured on NBC News was a big deal for us. Going beyond the mainstream press and advertising trades, we were really impressed with the heart of the final piece and how viewers connected to the families we featured.

The most technological thing about the project were the drones themselves. From the Super Bowl to the Winter Olympics, Intel’s Drone Team merges tech and art to create spectacular digital fireworks. Intel built the hardware and software that not only allows them to operate seamlessly, but create custom text and symbols catered to each individual event. We went with a docu-style shooting approach to capture the spectacular show from every angle, and the film was released on social media.

We wanted to show how far the LGBTQ community have come since the days when they had to
keep their true selves hidden. Using 300 drones to put symbols of pride in the sky for everyone
to see seemed like the ultimate, most future-facing way to do this. We were excited to use Intel’s own technological achievement to celebrate their LGBTQ employees.

The final film was even more moving and personal than we ever hoped. Our director, Josh Nussbaum, captured intimate, personal moments with our Intel families. The result is an authentic, touching tribute to the LGBTQ community. The marriage of a futuristic technical achievement and the humanity of Intel’s employees was powerful beyond our expectations - probably because it was true to Intel as a company.

Technology is a powerful tool. It's our responsibility to use it to create projects that not only amaze, but also do good in the world. Hunting for new technologies and keeping an open mind as to their potential applications will be the key to making sure we achieve this. In this case of this project, it was exciting to work with a business that used its own technological achievement to honor their LGBTQ workforce and served as a positive example to other companies.

Digital campaigns showcasing a company's commitment to encouraging community growth and development, and to activities and programs that benefit the environment, consumers, employees, and the public.