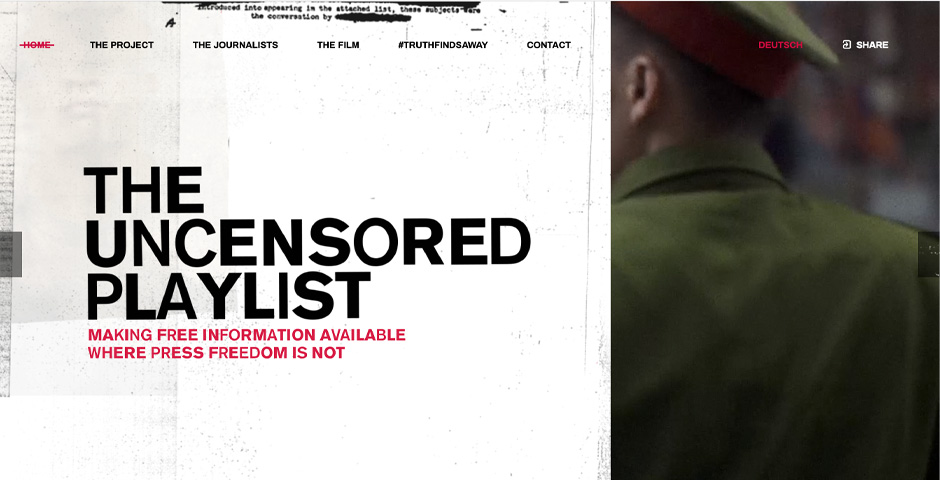 The Uncensored Playlist is an initiative for sharing news stories in censored countries through platforms like Spotify, Apple Music, and Deezer. By transforming stories into songs with unsuspicious titles and artwork, the initiative aims to get the work of exiled journalists across the border and into people’s playlists. Just like other pop songs, the music spreads through word of mouth, turning breaking stories into hits. Launched on World Day Against Cyber Censorship, the Uncensored Playlist raises awareness not just for the individual stories but also for the bigger story of Cyber Censorship.

Online press censorship is on the rise globally. Meaning that in a large number of countries, people are unable to access independent blogs and news sites, denying them their right to free information. We wanted to reinstate journalists’ fundamental rights, bringing their previously censored stories back to oppressed societies. To do so, we created tracks that not only take an ingenious approach to censorship but also manage to stand up as pieces of entertainment in their own right.

One breakthrough moment was when the first article was played as a song demo. The moment we realized: This works. This will reach people.

This idea of using music as a trojan horse for truth is not one that only works on paper.

Another one was when we saw that all the films were successfully leaked onto the services.

The moment they were uploaded we knew we overcame a barrier and that our loophole worked.

That moment we knew, censorship has lost.

We first had to uncover what had been hidden: track down journalists who’d been silenced by censorship. Our music team traveled incognito to five oppressed countries for interviews with each of the journalists — capturing the essence of their stories before transforming them into lyrics. On location, the team met with local musicians, explored genres, local instruments, and shot footage for music videos. Afterward, we also created cover art for albums before uploading them onto Spotify, Apple Music, and Deezer.

Ironically, and obviously, one of the greatest challenges was ensuring that every song would be listenable in its target country. This meant using a wide range of streaming platforms to keep the loophole open as long as possible. To further ensure the availability of the songs for as long as possible, the artwork was altered and the names of the music artists were hidden. This to shield them from possible reprisal in their own countries.

The playlist sparked a global conversation about censorship, resulting in 300+ stories appearing in global music and news media The Guardian, The Fader, Der Spiegel, Glamour, Pitchfork, and the BBC, to name a few. Collectively, we managed to reach 680+ million people to date — a far wider audience than the original articles could ever have counted on. But most importantly, our songs became hits in the places where their lyrics were once outlawed: peaking at #7 in the Vietnamese iTunes chart in its very first week. Encouraging globally recognized names such as Amazon to support our message by offering the album for sale.

Apart from the use of music streaming services, we developed a website with Adobe Experience Manager. On that website, we embedded a Soundcloud playlist — for easy access to all the songs — and a Twitter integration, exposing the global impact of the campaign with the hashtag #truthfindsaway.

There are few projects where the medium is more crucial. We utilized an existing loophole to circumvent cyber censorship, without which the Uncensored Playlist wouldn’t even exist. The streaming platforms are pivotal to spreading this message.

Public interest and appreciation have been wilder than we could’ve expected. Apart from the media coverage, it was amazing to see the playlist’s success in Vietnam as it proved the word got out to the intended audience.

We’ve always believed that technology is one of the most powerful tools to effect change — sometimes, it’s really as "simple" as optimizing a loophole. To make sure that we see these opportunities and know how to seize them, we make sure we’re at the top of our trade. Working with early adopters and experts to make the most out of any technology, that’ll help us make a difference with every project.