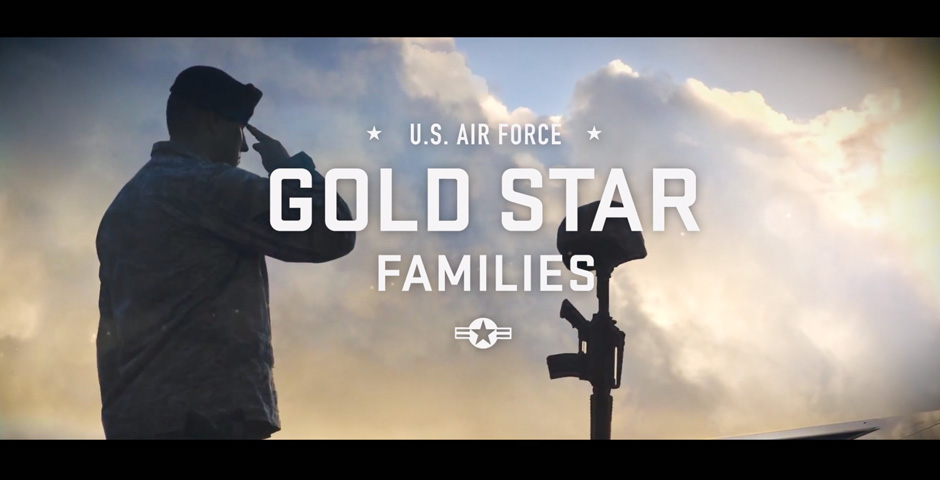 There’s a never-ending grieving process for Air Force families who’ve lost loved ones in combat. They’re called Gold Star Families. This video is narrated by a Gold Star wife with children currently serving in the military. Her husband’s coffin is pictured about halfway through. Gold Star Families don’t stop being Air Force families. We wanted to encourage them to visit bases, and to remind current Airmen to embrace these families as their own. The Air Force never forgets the sons and daughters, fathers and mothers, husbands and wives… who died for their country. And it’s important for these special families to know that THEY are not forgotten.

The Air Force had just begun a program giving Gold Star Families more and easier access to Air Force bases. Visiting is part of a never-ending grieving process. Tactically, we wanted a video letting the families know about the program and reminding Airmen at gate security to watch for the new Gold Star base pass. Emotionally, we wanted to remind each Airman to embrace these families as if they were their own mothers, daughters, husbands, fathers, or sons. That they could offer hugs and comfort that their fallen brothers and sisters could not. To welcome these families and honor their sacrifice every time they came across the gates of a base.

The one moment that stands out in the execution was the recording of the voiceover. This was a Gold Star wife who lost her husband on his first and only deployment. She has children currently in the military. She’s run marathons in all 50 states and on all seven continents. It took her 17 takes to record the VO.

We started by interviewing Gold Star Families. These interviews were raw and difficult. A mother of a Special Ops Airman who was killed by a roadside bomb - his remains had to buried in a mass grave at Arlington with an Iraqi soldier and three others because they were indistinguishable. This mom was one of the toughest, most unshakable people you will ever meet. We talked to children and parents and spouses. And we began gathering photos and home movies.

Every family that heard about this wanted to be involved. But we couldn’t get enough photos or home movies. We were frankly a little surprised and worried we wouldn’t have enough to fill the entire video. It didn’t occur to us that lots of families – especially parents of fallen Airmen – didn’t have digital copies of cherished photos or film. Naturally, they didn’t want to part with shoeboxes of old photos or framed pictures. We had to wait for word to spread about the project within the Air Force family before we began receiving more and more assets.

The video premiered at an Air Force function in Washington DC. There were a few hundred Gold Star Family members in attendance. People were shaken. The Air Force Chief of Staff was moved to tears. Because our goals were emotional it’s hard to provide percentages but the video has been shared across the Air Force community and the response continues to be overwhelming every time it’s reposted. In the advertising community we get praised for our work but it’s not often people come up to you having to fight back tears to choke out the words "thank you."