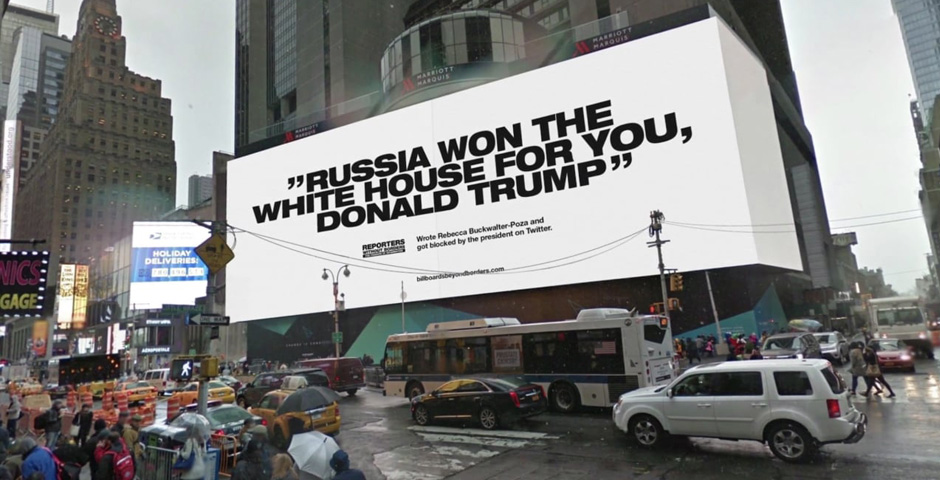 Billboards Beyond Borders broke new ground by using a “loophole” in Google Maps to create a new type of outdoor advertising, that only existed online.

We replaced existing messages on big billboards in countries where freedom of speech is under threat, with real quotes from journalists that had been censored or silenced. Visible for everyone who visited the places in Google Street View.

After 72 hours, what we were anticipating happened: Google took down the campaign for violating Google Maps' policy, helping us create a second wave of PR.

The most crucial part in executing the campaign was the question that haunted us for a long time: How in hell could we actually get our billboards into the real Google Street View?

It took some time of research, discussions, and trial and error before we found a solution that was just in front of us; Google Street View is partly user-generated, so all we have to do is just upload the images by ourselves.

One of the first things we did was probably gathering all the quotes that were used in our ads. It was actually harder than we thought. Our criteria were that they, first of all, had to be 100% authentic. But they also had to be relevant and eye-catching on a billboard, which was a little bit trickier.

The brief was to draw attention to the urgent situation for reporters around the world, and show the general public how important a world with freedom of information is. One of our objectives was also to show that the situation for journalists is getting worse in most parts of the world, not just the usual suspects that everyone already knows about.

About the Online Guerrilla & Innovation category

Consists of unconventional and innovative online promotional techniques, done with a small marketing budget or with technological advancement as motivation for innovation. By nature, guerilla marketing is subtle, often deceptive; sometimes called "stealth" marketing. All components of the entry must be online.