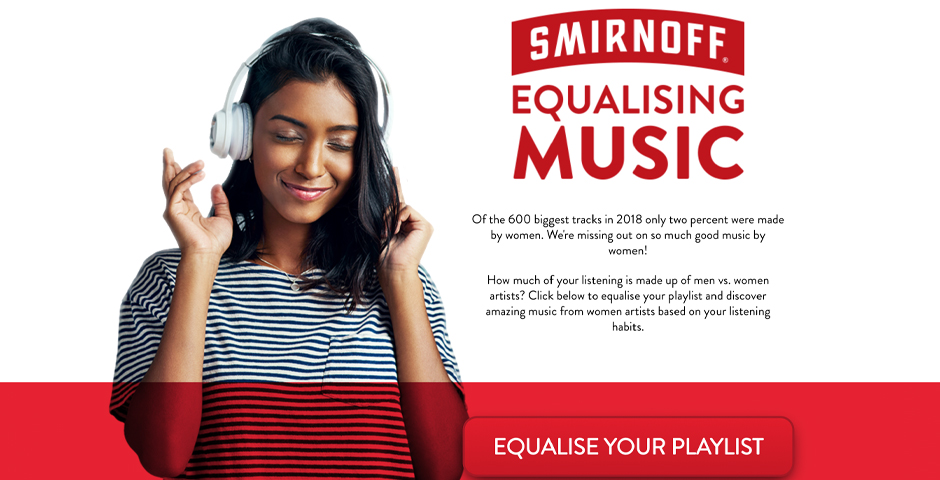 The Smirnoff Equalizer defied our expectations by becoming a landmark example of how a global, digital-first media campaign, built on shared purpose and passion, can create a positive impact in culture, and achieve significant business results. - Carat Team

It’s music that often fuels good times, bringing people together and creating inclusive moments. But in 2016, Smirnoff realized that the music industry itself wasn’t very inclusive. In fact, in the last six years, less than 10% of artists nominated for Grammys were women.

This is the story of how Smirnoff, an activist brand in music, and Spotify, the world’s largest music platform, came together to transform peoples’ listening habits at scale by increasing the number of women artists they listen to.

2017 was a landmark year for women. Globally, gender bias and inequality are increasingly being exposed through progressive movements, from the Women’s March to #MeToo to #TimesUp, not only have these movements increased awareness, but are empowering voices to be heard.

Despite this progress, Smirnoff and Spotify discovered that ten out of ten top streamed tracks on Spotify were from men artists. While people began waking up to gender disparity in music, our listening habits didn’t reflect the change we want to see.

The critical moment in this work was deciding that we would show users their unconscious bias, rather than tell them about it. Lots of projects (and plenty that we’ve done) would have taken an outbound brand-as-educator tone and sought to broadcast the issue and the solution. Basically, trying to drive change through telling. What made Smirnoff Equalizer really transformative was that it was an experience that showed people their biases and leveraged that powerful moment to affect change.

In collaboration with Spotify, a partner with a shared passion for improving gender in music, we launched a platform built for progression. We launched the Equalizer in the run up to International Women’s Day, where gender equality conversations heighten globally. Our strategy sought to create a platform that would create personalized engagement, offer solutions, and lead to more discovery and opportunity for great women artists. Through the Equalizer we presented our audience with their individual music streaming habits highlighting the split of men vs. women artists. Empowered them to make change by providing a solution - an "equalized" playlist. Encouraged sharing through social media.

While setting up the API we had to determine how to catalog Spotify’s artists, quickly and efficiently, by gender (women, men, non-binary). We leveraged a cascading process, in which we began cataloging artists in the top playlists across key genres in our lead markets across the globe. From pre-launch to mid-way through the campaign, we had cataloged roughly 90% of signed artists within the Spotify platform. All of this was possible due to the commitment of the campaign mission from Spotify, and the strong partnership built between Spotify and Smirnoff.

Smirnoff Equalizer was built with a dynamic API at its core. The campaign centered on industry-first use of personalized streaming data from users’ Spotify accounts. We categorized 90% of Spotify’s catalogue into three groups: women, men and non-binary artists. The Equalizer analyzed a user’s listening habits against the catalogue in-real time, and presented the user with a % breakdown of men vs. women artists. To empower action, the Equalizer "slider" allowed users to add in more women artists into their personalized playlist, and share via social to encourage further discovery. We amplified our message through a global media activation across US, UK, Ireland, Australia, Mexico, and Argentina.

To truly illustrate (show not tell) the truth about unconscious bias in music, we needed the world’s largest streaming platform, Spotify. In partnership with Spotify, and through this API, we were able to create an industry-first use of real-time analysis of personalized streaming data, visually convey how unconscious bias impacts listening habits, and, most importantly, empower immediate action and change.

Smirnoff Equalizer raised the conversation across the globe, with +604,000 people taking part of the Equalizer experience, +193,000 equalized playlists created, +507,000 social mentions, and +614m impressions (+90% earned). Together, we have moved one step closer to achieving gender parity in music and continued to empower the transformation of listening habits at scale; creating +2.7 million opportunities for women artists to be discovered with a +52% increase of women artists streamed through Spotify (average 70% women vs 30% men).

Listeners were so surprised by their listening habits, that they started to share their results and the world took notice. Press even got in on the act as the Equalizer organically made it into titles including Billboard, Forbes, Pitchfork, Yahoo, and The Independent.

The Smirnoff Equalizer defied our expectations by becoming a landmark example of how a global, digital-first media campaign, built on shared purpose and passion, can create a positive impact in culture, and achieve significant business results.

This campaign was a landmark example of how a global, data-driven partnership, built on shared purpose and passion, can create a positive impact in culture and achieve significant business results. To continue to create impactful, purpose-driven marketing campaigns, we plan to further leverage technology and partners that share the values of our clients. It’s changed our whole approach to all partner opportunities – be they technology, or data, or content. And that’s been the real internal success of this work – the change it's driven within the agency and the client on how we work and how we approach the new ways of modern marketing.

About the Best Use of Data Driven Media category

Best, most innovative, and effective or creative use of data-driven digital media that serves users with a personalized experience. This includes such efforts as targeted marketing messages, remarketing, etc.