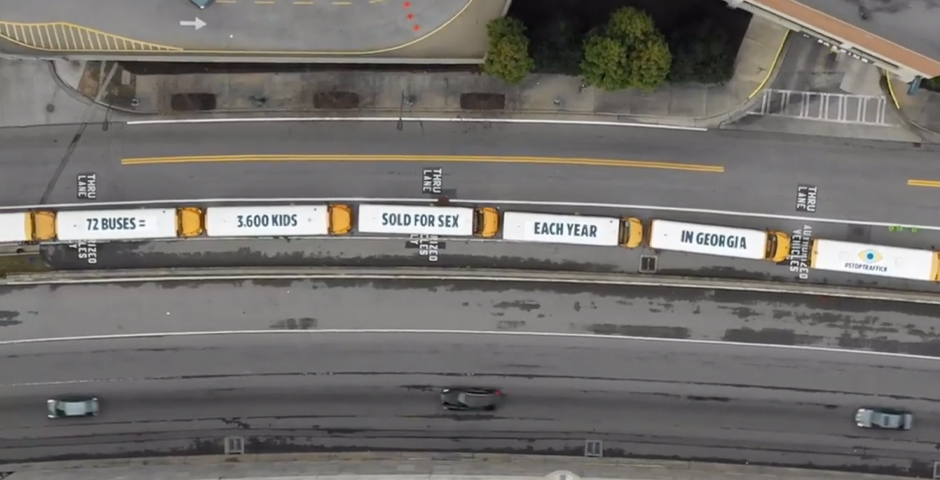 We set out to raise awareness and take over the traffic/traffick conversation, but we were amazed with the results: 169 people involved in a sex trafficking ring were arrested prior to the Super Bowl. - BBDO Atlanta Team

Stop Traffick brought an FBI statistic to life in a way too big to ignore: “3,600 kids sold for sex each year in Georgia." Three weeks before Atlanta hosted Super Bowl LIII, we wrapped 72 school buses, each representing 50 kids, to represent what 3,600 kids looks like & humanize that number. This message was amplified via OOH, car & store decals, social, and a rally. It required six months of coordination with the governor, Department of Transportation, bus drivers, and police officers. Stop Traffick increased awareness in Atlanta and inspired other cities to find their own “number of buses.”

More than 3,600 adolescents are sold for sex each year in Georgia.* This statistic is due in part to Atlanta’s visibility as a global business hub, the large convention and tourism industry, and to its proximity to the world’s busiest airport.

The crisis was set to worsen in January 2019 as the city hosted Super Bowl LIII. While the game brings large crowds and excitement, the excitement is tempered by an increase in sex trafficking.

Our goal was to shine a light on the sex trafficking of minors through awareness, education, and action. And Atlanta was the right place at the right time to demonstrate just how big the crisis is and spark a movement to Stop Traffick.

Our breakthrough moment was twofold. First, it’s easy to ignore a statistic. But it’s nearly impossible to ignore 72 school buses – generally associated with innocence and safety – stopping traffic in Atlanta to highlight the massiveness of Georgia’s child sex trafficking problem, which no one wants to talk about. Second, highway traffic is also a huge problem in Atlanta that everyone loves to talk about. In fact, the city can’t shut up about it! So, we used the conversation around highway traffic to get people talking about child sex trafficking to change the conversation. In other words, we used “traffic” to talk about “traffick.”

Along with Street Grace's CEO Bob Rodgers, we reached out to Georgia Attorney General Chris Carr six months prior to the stunt. From there, it required citywide collaboration from public & private companies as well as 50 police officers, a local public school system, and 100 bus drivers. We wrapped the tops and sides of 72 school buses with Stop Traffick messages large enough for news helicopters to broadcast. These buses formed a mile-long, moving billboard, disrupting morning traffic across Atlanta.

Four days prior to the event, with the rally planned, buses wrapped and bus drivers prepped, the city changed the route of the buses through Atlanta, and we lost the holding area for the buses. Also, the rally location changed because there weren't enough Atlanta police officers to monitor the event after New Year's Day. After numerous phone calls and negotiations, the route was reinstated and the rally returned to its previous location.

Our expectations were met in these three areas:

EDUCATION: Information on how to spot the signs of what this crime does to young women was shared. Facebook engagement went up 594%, page views went up 735%, and video views went up 175,033%.

ACTION: The most important result was the intense focus the FBI put on human trafficking immediately after our event, which led to 169 arrests throughout Metro Atlanta.

A team coordinated live updates across social channels, literally changing the conversation from “traffic” to “traffick.” Video assets of the buses & survivor interviews were distributed.

Georgia’s new governor and business leaders were recruited to participate in a rally, bringing notoriety and commitment.

It culminated on StopTraffick.com where we promoted numerous ways to take action, including community watchdog pledges, money donations, and training requests for schools and businesses.

Yes, StopTraffick.com was a resource throughout January, Human Trafficking Awareness Month, where we promoted numerous ways to take action, including community watchdog pledges, money donations, and training requests for schools and businesses. School buses as a medium were critical as a symbol of children and innocence as they were seen driving in a single line through the streets of Atlanta, creating the world’s largest moving billboard. This simple, stunning “Stop Traffick” message was amplified in channels around the city.

We set out to raise awareness and take over the traffic/traffick conversation, but we were amazed with the results: 169 people involved in a sex trafficking ring were arrested prior to the Super Bowl.

We are already using technology to make a difference in people's lives. Houston was inspired by our Stop Traffick stunt to find their “number of school buses” and to spark their own citywide conversation. Twelve more states are in talks to follow suit, proving #StopTraffick is, in fact, inciting a movement.

In addition, we used technology to create Gracie for Street Grace, an artificially intelligent online presence & learning bot designed to mimic real underage kids being sold for sex. The data gathered by Gracie has fueled the largest ever verifiable study on underage sex trafficking, which gives us ammunition to use in fighting for real policy change and action.

Best, most innovative, and effective or creative campaign created for a brand on behalf of a societal cause.