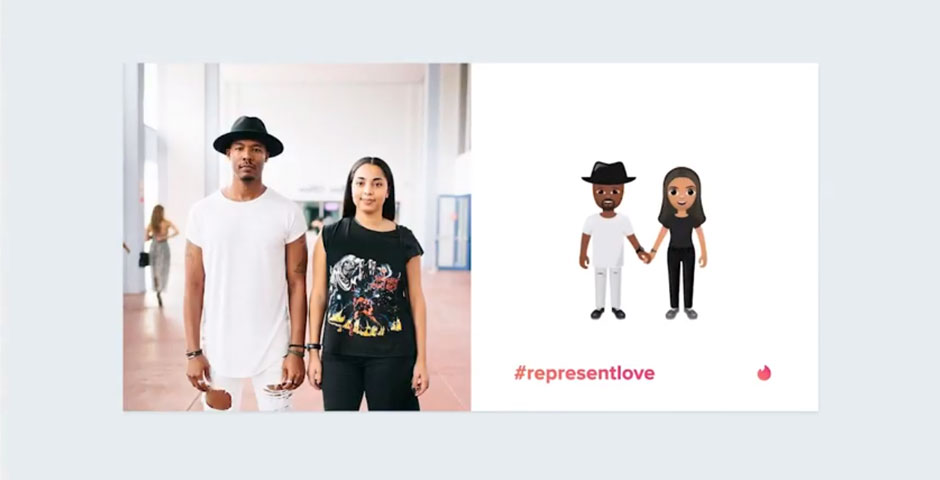 HERE FOR EQUALITY NOT HOOKUPS Tinder

Emojis are the universal language of the digital age. We use them to show our emotions, to give clarity and context to our conversations, and to represent the world around us. It may seem like there’s an emoji for everything, but that’s not the case. While emojis for people of color and emojis for same-sex couples both became a reality in 2015, one group of people is still excluded from emoji representation: interracial couples. At Tinder, we believe that no one should ever feel unrepresented or unseen. Love is universal, and it’s time for interracial couples to be represented in our universal language.

As the world’s most diverse dating app and the brand that changed how people connect across the globe, Tinder wanted to continue driving the narrative around dating in the digital age and the importance of fostering love in all forms. When a study found that the rise of online dating spurred by Tinder led to an increase in interracial marriages, we realized that our diverse user base was a point of differentiation among our competitors. With our #RepresentLove campaign we wanted to show our commitment to representing our users and celebrating interracial love. We petitioned Unicode, so the nearly three in four (72%) Tinder users who have dated someone of a different race can be represented.

One of the biggest breakthrough moments was upon launch, when we realized the degree to which the campaign struck a deep emotional and personal chord with people everywhere. The outpouring of positive feedback was overwhelming in the best way and validated just how uniquely positioned Tinder was to be a voice for interracial relationships of all kinds. The campaign was celebrated globally across the US, UK, France, Spain, Germany, Brazil, Chile, Argentina, Mexico, Australia, India, and Russia. The world fell in love with #RepresentLove and it became the most successful emoji petition to date. We knew in that moment that we had done something truly meaningful for our users and non-users alike.

We underscored Tinder’s commitment to fostering diversity and inclusion on the app by petitioning Unicode to create a series of interracial couple emojis to smartphones. In addition, we partnered with Emojination to build a technical proposal that was signed by like-minded advocates, such as Alexis Ohanian, Reddit co-founder. We then leveraged a global study on consumer attitudes around openness to interracial dating, which proved that Tinder users were among the most open-minded of the online dating set, and further validated the need for emojis that represent the full spectrum of our users.

Although the response to our #RepresentLove campaign was overwhelmingly based in positivity and support, we did receive hateful comments on social media bashing our stance on the importance of love’s equal representation. At times, we were targeted by trolls and hate groups, who called interracial couples and the campaign an "abomination," "unnatural," "propaganda" and more. In some cases, we took to Twitter (https://bit.ly/2KutaaU) to fight back and reiterate our support of this community. When it comes to fighting for equality, Tinder refuses to step down, despite potential risks.

The impact far exceeded our expectations. Our goal was to get interracial couple emojis on our keyboards. We shared a video calling on people everywhere to fight for representation of all love by signing a change.org petition. Over 50K signatures later and a year of campaigning, Tinder’s proposal officially passed with unanimous approval by Unicode—announcing in March that interracial couples will be represented on phones everywhere beginning this year. With 70+ variations, our visual language of emojis will finally be as diverse as the love it represents. That’s truly advanced technology. Representation leads to awareness and more tolerance—and soon we will have it at our fingertips.

We created our own native landing site to house all campaign information, including our anthem video from YouTube and a CTA driving visitors to our change.org petition. We used social channels to amplify messaging and launch a user-generated content campaign prompting couples to support the cause by posting photos of themselves to receive a personal “emojified” version. Our in-house designers then generated individualized emojis of each couple who posted, which were then shared widely across all social platforms. Tinder also promoted the campaign in-app via native display card with a global video ad unit showcasing the video, announcing the campaign and driving users to the petition site.

The mediums of video, social media programming, bespoke design, in-app display cards/ads, and the digital petition that we used were crucial in sharing our message widely, effectively, and in an impactful way. Tinder’s primary audience is young singles ages 18-25, who are digital natives through and through. They digest their content online, and engage with their peers and the world around them on social media and through the visual dialogues of emojis, GIFs, video and more. The execution of our hero video featuring real interracial couples and the real-time creative of bespoke interracial couple emojis of real people were ways to create excitement and emotional connection to the initiative.

The campaign was so powerful that it resulted in over 17% new and re-downloads of Tinder, resonating with both new users and users who had deleted the app. The first week, we saw a 44% MOM increase in re-downloads, unprecedented results for any Tinder marketing program. The campaign surpassed our KPIs with 200+ PR stories, 1.8B+ impressions and 50K+ petition signatures. It drove social conversation, including 47M uses of @tinder and #representlove and 5.2M YouTube views. The campaign also earned 5.4M ad impressions, including video view rates over 30%, surpassing industry benchmarks. These results demonstrated the immense impact on media, influencers, celebrities, and users around the globe.

Tinder is the category creator and pioneer for mobile app-based dating. With pivotal innovations like the double opt-in (meaning both people must indicate interest by "liking" each other before they can message) and the Right Swipe, Tinder forever changed popular culture and set the standard for how people today meet—spawning countless imitators along the way. We prioritize the user experience, listening carefully to feedback and constantly innovating through new features, testing updated iterations, and refining the swiping experience to meet the needs of our users. Tinder is modern dating—and will continue shaping the culture along with it.

When it comes to fighting for equality, Tinder refuses to step down, despite potential risks. - Tinder Team

About the Best Social Community Building and Engagement category

Best, most innovative, and effective or creative use of a social community building-and-engagement campaign.