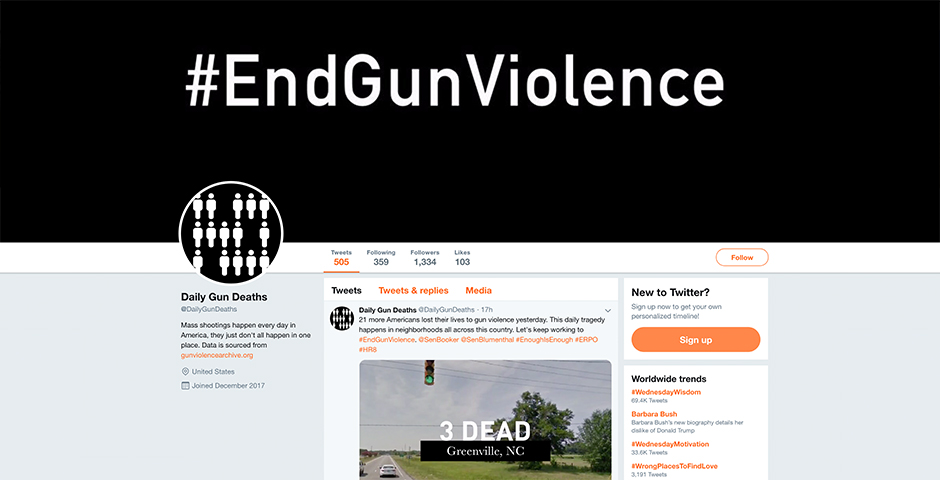 A large number of politicians across the country and a number of celebrities and high profile activists who want to put an end to gun violence now follow our daily twitter feed. - Cole & Weber Team

Gun violence kills people every single day in America. 14,731 people were shot and killed in 2018 and yet most deaths go completely unnoticed. Only the mass shootings get coverage. @DailyGunDeaths was developed to raise awareness of this issue every single day and push for change. We created an automated way to generate a daily video that highlights the street location of each death across America from the day prior. This video is then tweeted out at politicians, the media, and active influencers to make sure no gun death fell through the cracks.

A friend of our agency was shot in the Las Vegas mass shooting. Fortunately, he survived, but it left us feeling frustrated and helpless about the issue of gun violence, so we decided to take it upon ourselves to try and raise awareness of this epidemic. As we started researching the data we realized that mass shootings get a lot of press, but they are only a small percentage of the deaths that occur each year. It became clear that mass shootings happen every single day in America, just not all in one place. So, we set out to raise awareness of this issue on a daily basis and push for change.

We needed to create a dynamic video that was simple to cut, yet impactful. The combination of the actual street locations and the gun shot sound effect punctuating each death was exactly what we were looking for. The first time we watched our demo video, we knew we had something powerful that would make people stop and pay attention.

We needed to find a reliable data source that we could access, allowing us to create a new video every day. gunviolencearchive.org publishes real-time data that accounts for all gun violence deaths across the country. Once we found our data, we focused on creating the most powerful way to bring it to life.

gunviolencearchive.org made their data public, but it required a manual download. We needed a way to automate the download process for our video production process. We reached out to gunviolencearchive.org in hopes they would help us with a solution, but they were unresponsive. Without their data we were stuck. Ultimately, we were able to write a program that automatically scrapes their data from the site at a specific time each day, and we accomplished this all in the background without any further assistance from gunviolencearchive.org.

We’ve seen millions of #endgunviolence mentions as a direct result of our effort. A large number of politicians across the country and a number of celebrities and high profile activists who want to put an end to gun violence now follow our daily twitter feed. Finally, over 126 gun safety bills were written into law in 2018. The issue of gun violence in America is far from resolved, but the conversation is heading in the right direction.

In order to automate the production of our videos, we needed to write a custom Adobe After Effects script that dynamically pulled in the real-time data and google streetview images. The end videos are pushed out through our twitter account: @DailyGunDeaths

Twitter was the ideal social media channel for our effort. The social conversations happening on Twitter perfectly aligned with our efforts and it allowed us to specifically target politicians, the media, and engaged citizens and celebrities.

Social media accounts or content dedicated to public service and activism pursuits. Platform agnostic—enter any and all social media that best exemplify your work.