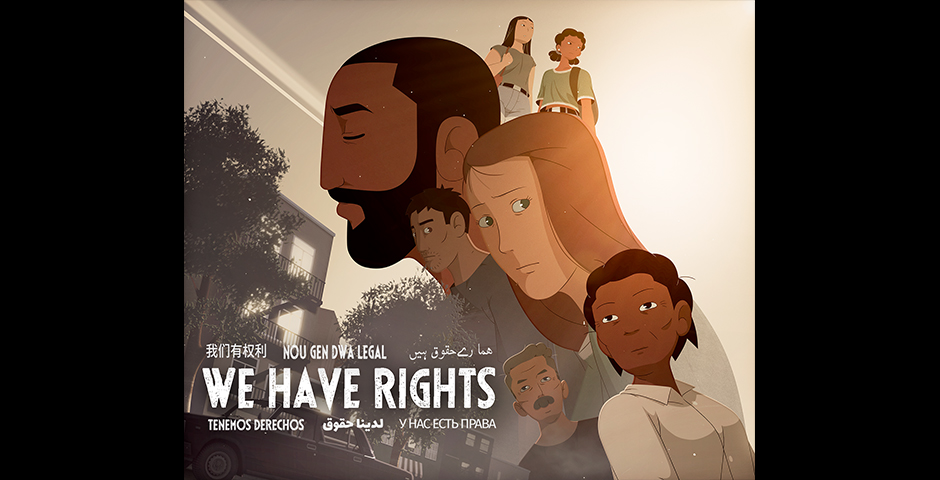 Immigrant communities in the US are under attack. We Have Rights is an animated video series and campaign that empowers immigrant communities to safely defend their rights during encounters with Immigration and Customs Enforcement (ICE). - MediaTank Production Team

Immigrant communities in the US are under attack. We Have Rights is an animated video series and campaign that empowers immigrant communities to safely defend their rights during encounters with Immigration and Customs Enforcement (ICE). The videos help viewers understand what to expect and what to do in four common scenarios: when ICE is at your door, when ICE is inside your home, when ICE stops you on the street, and when ICE arrests you. Based on true stories, the videos are narrated in 7 languages by an all-star cast. They provide urgent information to affected communities and give American citizens an important glimpse of the daily assaults being carried out on our immigrant neighbors.

My partner, Abby Goldberg at Variant Strategies, and I met with Scott Hechinger at Brooklyn Defender Services in February 2017. Their immigration team was overwhelmed by calls from clients facing mass deportation: “We’re scared. We don’t know what to do,” they said. Many were not aware that they had important rights when approached by ICE. Existing resources were largely only available in English and Spanish, required high levels of literacy, and weren’t optimized for social media, where many of Brooklyn Defender Services’ clients went for information. We needed a tool that provided urgent information to immigrant communities while being powerful enough to engage the general public.

During the focus group with Brooklyn Defender Services’ clients, we read through the first draft of the script. It’s filled with instructions like, “Tell ICE this,” and “ICE will try that.” After reading through all four scripts, a man in the back of the room raised his hand. “What’s ICE?” he asked. It was a really important reminder that the videos had to serve the needs of the audience we were making them for or they would be useless. For that reason, it was crucial to check our own assumptions and keep the community involved throughout the production and distribution process. And, of course, all four videos now include an explanation of what ICE is.

We worked with Brooklyn Defender Services and the Immigrant Defense Project to create an extensive list of the deceptive tactics ICE uses when detaining immigrants, the legal rights immigrants have in those situations, and how they can defend their rights safely. We worked with Fluorfilms on animation and started mocking up ideas. We then convened a focus group of Brooklyn Defender Services’ clients with diverse immigration statuses from a variety of countries. They gave feedback on early scripts and storyboards, conveyed what information was most needed and which distribution platforms would be effective in their communities. The ACLU came on board with critical support for distribution.

Staring at that long list of dense legalese was daunting. How could we present it in a compelling way without sacrificing legal precision? Overcoming that hurdle came down to the art of storytelling. We presented it all within powerful true stories that embody the lived experience of the communities we spoke with. We worked with Fluorfilms to create cinematic images to signal that this is not a typical PSA. Dan Teicher created a haunting score that leaves the viewer empowered. And Flavorlab created detailed sound design to bring the audience into the environment. In short, we used all the cinematic tools available to us to create videos that are hopefully as gripping as they are informative.

Our expectations were blown out of the water. The videos have been viewed over 10 million times online and even more offline. They’re being used in Know Your Rights training sessions for activists and immigrant communities and embedded in a new app created by United We Dream. They’re in ESL curricula at the New York Public Library, and are being shown in waiting rooms, consulates, classrooms, and even police departments. Those views aren’t just eyeballs, they’re people who depend on this information to defend themselves and their families against injustice. It’s all summed up by one viewer who said, “I know that I have rights despite being undocumented and it has empowered me in many ways.”

The use of animation for the videos was very important as it allowed for maximum flexibility across languages. It was critical that the videos be accessible to communities that spoke the myriad of languages spoken by Brooklyn Defender Services’ clients. Animation allowed us to use multiple languages (and continue to add new languages as needed) without making anyone feel like their own language was secondary. And thanks to the participation of people like Jesse Williams (English), Diane Guerrero (Spanish), and Kumail Nanjiani (Urdu), the videos are voiced in all languages by an all-star cast that has helped expand the reach of this important information.

The videos have proven flexible across multiple distribution platforms. But we learned from our focus group that social media, and Facebook specifically, was a key platform for reaching our primary audience. Knowing that sharing on social media is driven largely by emotion meant that we had to build powerful emotions into the videos. That’s what made that initial list of legalese so intimidating. As filmmakers, we were well equipped to handle that challenge and built a great team of collaborators and partners to ensure we succeeded. For me, at the end of the day it all comes down to finding a powerful story and telling it well.

Sadly, what’s defied our expectations is the current administration’s endless drive to find new ways of inflicting harm on immigrant communities. In making these four videos, we thought we were covering the key information that immigrant communities need to defend themselves and their loved ones. At the time, we couldn’t imagine that separating families and putting children in cages at the border would become the norm in our country. To respond to this continuously expanding need, we’re developing a second phase of the project that will include (at least) videos on rights at the border and how bystanders can safely document abuses by ICE. I shudder to think what type of information will be needed next.

The lesson from this project is that, when it comes to using media to inspire social change, it’s all about telling powerful stories that allow audiences to understand the lived experience of others. Technology provides new ways of communicating those stories more effectively. I’m excited by the prospect VR brings for making those experiences more tangible and the ways in which interactive storytelling can allow viewers to experience the decision points people are faced with every day. But without a powerful story rooted in the lives of individuals at the center, cutting-edge technologies are just bells and whistles that make for novel experiences but don’t necessarily drive impact.