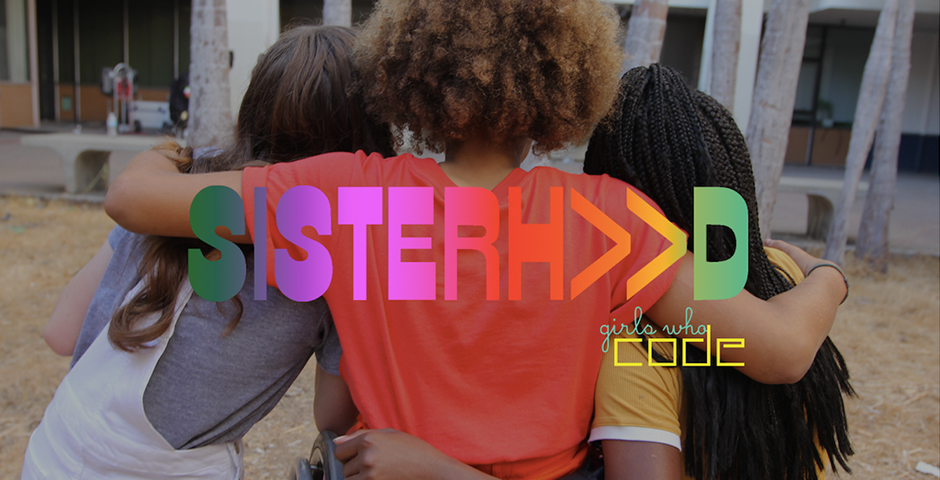 In celebration of the International Day of the Girl, Girls Who Code launched a visual album meant to encourage, inspire, and empower young women to take an active role in their communities and create the change they wish to see in the world, together. The album was titled SISTERH>>D, and each video track explored a different aspect of modern female community. It showed young girls that no matter where they're from, or what they look like, their actions—both big and small—can have a positive impact.

Girls Who Code has always been more than a non-profit; we’re a movement of thousands of girls dedicated to changing the world through technology. Our Sisterhood visual album was an opportunity for us to celebrate the core of our movement: sisterhood and activism. The album was meant to inspire young women around the world to stand up, speak out, and support one another—correcting centuries-long power imbalances across lines of gender, race, sexuality, and more.

Our breakthrough moment was definitely the shoot for the Anthem music video. It was the largest shoot, and the rallying cry of the album. It brought together musicians, dancers, filmmakers, coders, and more to create a beautiful video. At the end of filming, so many of the young girls talked about what an incredible day it had been, how amazing it felt to be a part of something so special, and to see so many different types of girls and women represented. That day confirmed that we were creating something important.

Once we decided to create a visual album, with each video exploring a different aspect of sisterhood, we began thinking about the collaborators—artists, activists, actresses, musicians—that would best bring the album to life. Representation was an extremely important aspect of the project. We wanted to include girls and women from all different cultures and backgrounds, and to share their different experiences and perspectives. In the end, it was the vast variety of voices that really enriched the album.

Our biggest hurdle came when we were developing the distribution strategy. When we first conceived of the visual album, we planned to "drop" the entire album on one day, a la Lemonade. But as we worked through each video track, we realized there was so much content to be shared, and we feared that some would get lost in the shuffle. We went back to the drawing board to devise a new strategy. It was a collaborative effort between Girls Who Code, Yours Truly Creative (creative agency), and MI&C (distribution agency). We thought about the ways in which young women engage with content on the internet, the people the follow and the stories they connect to, to inform our new plan.

We were very happy with the reach of the campaign and the action that it inspired. On the International Day of the Girl, hundreds of girls, women, boys, and men in the GWC network and beyond, took to social media to raise their hands for sisterhood, sharing the cause nearest and dearest to their heart.

With Girls Who Code's core mission grounded in computer science, technology played a major role in our campaign. Being a visual album, audio and visual technology were our primary tools throughout the creative process. We also incorporated computers into several of the films, from Googling your local representative in our ASMR Activism film to girls coding in the Anthem video. For the launch of the campaign, we primarily used social media and YouTube. We developed content specific to each platform, primarily Facebook, Twitter, and Instagram, and put each of the full films in a YouTube playlist. We also developed a landing page on the Girls Who Code website, girlswhocode.com/sisterhood.

Our primary target, girls aged 13 - 22, spend a lot of time on social media, so we knew that we wanted to create a campaign that would reach them there, and also inspire them to engage, with the campaign and with each other. Social media is an incredible tool because it allows you to communicate and connect with people around the world, and connection was a crucial part of our message. We wanted to inspire girls to band together, and the magic of technology and social media make that possible.

This project exceeded our expectations in so many ways. The excitement and enthusiasm of everyone who participated was overwhelming, from the artists and actresses to the activists and young students. The process of creating each film was a special experience, and created lifelong friendships. Seeing people connect on set, or over the Skype, was amazing. And then releasing the project, and seeing everyone's reactions. Reading the comments and social media shares, so many girls called out specific people or moments they related to or were inspired by, and that was incredible, and really brought home the goal of the campaign. To create a community, and a connection.

Technology provides such valuable tools for not only the creation but the publication and circulation of projects. We look forward to developing new work that is able to reach people around the world, and provide them with valuable information and above all, promote connection.

We wanted to include girls and women from all different cultures and backgrounds, and to share their different experiences and perspectives. - Yours Truly Creative Team