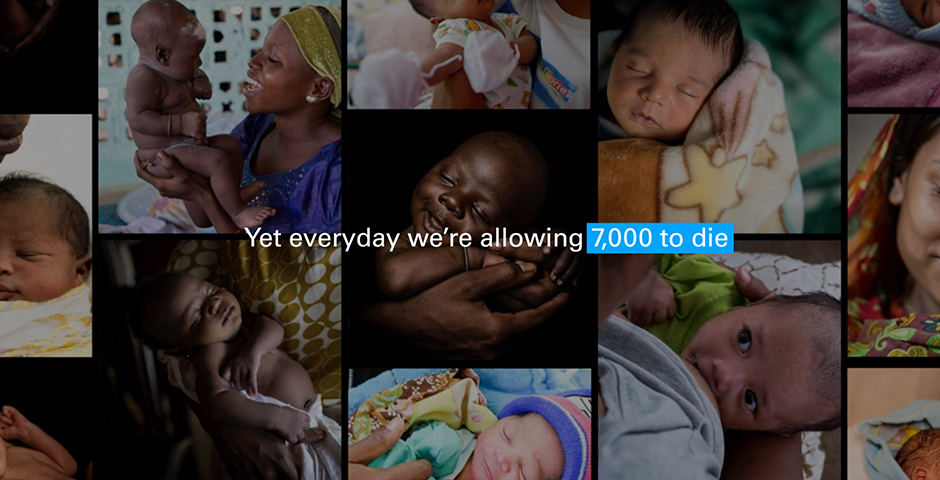 So why aren’t we stopping to help the 7,000 newborns who die every day?

With the help of an extraordinary, hyper-realistic animatronic newborn, we raised this question on the streets of Geneva, where world leaders were gathering for the World Health Assembly.

The Most Human Instinct earned attention across social channels. With £zero spent on media, it became Unicef’s most successful Instragram video of all time. It also resulted in action too. Over 150,000 petition signatures were delivered to global decision makers at the World Health Assembly. Governments have since agreed to invest in life-saving programs for mums and babies.

We are failing the world’s youngest citizens.
Although the world has made dramatic progress in reducing global rates of under-five child mortality, newborn deaths have declined at a slower pace.

These deaths are unnecessary. More than 80% of all newborn deaths are caused by preventable and treatable conditions.

But treatment and interventions are not reaching the mothers and children who need them most - the families who live in the most disadvantaged areas, enduring the harshest conditions.

UNICEF needed health ministers at the World Health Assembly to increase investment in quality healthcare for every mother and baby.

Protecting babies is the most basic human instinct.

So why aren’t we stopping to help the 7,000 newborns who die every day?

This was the logic that lead us to the idea.

We needed to reach global decision makers attending the World Health Assembly and the public at large, to move the issue up the agenda. To do that, we would stage a shareable social experiment at the very place they were gathering – the streets of Geneva. The experiment would need to be provocative and highly emotional to properly viewers on social channels to sign an online petition which would be delivered to decision makers at the Assembly.

We hope to make impact. But nobody could have prepared us for the emotion and outrage this stunt stirred up. Many people thought this was a real baby, and word spread around Geneva, with multiple calls to the police. Why isn't there this level of outrage and emotion for the real issue? The real newborns who need our help.

With £zero spent on media, it became Unicef’s most successful Instragram video of all time. It also resulted in action too. Over 150,000 petition signatures were delivered to global decision makers at the World Health Assembly. Governments have since agreed to invest in life-saving programs for mums and babies.

With £zero spent on media, we never expected this to it became Unicef’s most successful Instragram video of all time. After all, Unicef is an organisation that has all the best creative agencies doing all the most powerful creative work. The extent of the real world action was unexpected too. From views, to signatures, to policy change.

Tech for tech sake is never enough. The best work comes when you marry innovation with a timeless human truth. A fusion of technology with insight will always help create fresh work with the potential to explode through culture. This time it was an animatronic to demonstration our most human instinct. Tomorrow, who knows?

Tech for tech sake is never enough. The best work comes when you marry innovation with a timeless human truth. - Weber Shandwick Team