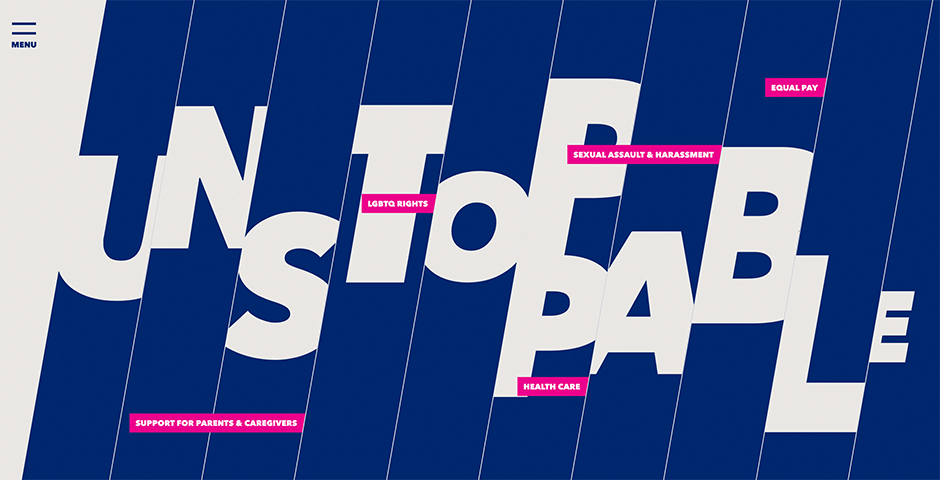 Launched ahead of the 2018 midterm elections, Unstoppable was designed to activate new accomplices in the movement to protect and expand reproductive rights, while raising awareness around intersecting issues such as systemic racism, income inequality, and sexual assault and harassment. Our primary target: young people and women, two key voting blocks whose collective power has the potential to drive extraordinary change in our lifetime.

In early 2018, with movements like #MeToo igniting powerful conversations nationwide, women were in the spotlight. While polls showed a growing hunger for change, at the same time, many young women reported barriers to political engagement—namely, insufficient information and alienation from peers.

-68% of women reported gender-based disrespect at least once in their lives
-69% of voters want more women in office
-55% of young women said not knowing enough kept them from getting politically involved
*Sources: PRRI 2018; PerryUndem 2017; PerryUndem 2017

Planned Parenthood already had a viral message. What they needed next was an organized campaign to build knowledge, agency, and solidarity.

In our design exploration, we kept coming back to flag; wherever we fall on the political spectrum, most people have some kind of sentiment wrapped up in their flags. Our designer created a quick mock-up of a potential UNSTOPPABLE flag—simple and beautiful, it featured forward-leaning, vertical stripes in the organization’s iconic “Action Pink.”

While the flag never came to fruition, we used those foward-leaning angles as a framing device across what the campaign’s digital HQ—UnstoppableNow.org. The homepage layout features key campaign issues, each contained in one of these frames, conveying a sense of progressive energy that refuses to be boxed into conventional structures.

Working in close collaboration, Firebelly and Planned Parenthood joined forces for multiple co-creation workshops at our Chicago studio. The team was interdisciplinary and diverse—given the campaign’s scope and ambition, it was critical that we not only understood but represented the identities and experiences of the people we wanted to reach.

After developing empathy maps, we identified our top priority: lowering the barriers to engagement by creating multiple entry points to activism. We generated an abundance of tactical ideas, from DIY kits for hosting equity roundtables to subversive street art campaigns to Twitter chats to step-by-step guides for talking to parents about abortion.

Early in our process, we had to reckon with the very real fact that Planned Parenthood’s base has historically been predominantly middle-aged white women. We wanted to expand it to include more young people and women of color but realized we simply didn’t have the same level of brand trust in those communities.

We rethought our in-person tactics—they would be too easy to ignore—and decided to focus on an earned media and influencer campaign. Planned Parenthood called in Emmy-nominated filmmaker Tanya Selvaratnam to curate a series of political pieces by independent artists, and we began building out an engagement strategy that leaned heavily on social media and digital interactions.

Watching the hashtag take off among supporters was thrilling— we saw young people express gratitude for the unstoppable women in their lives and luminaries like Gloria Steinem share the manifesto on Instagram.

But the real gut punch came at the launch party, where everyone who contributed their work to the campaign gathered to meet in person for the first time. It was a multi-generational, diverse collection of activists and artists from across the gender spectrum, united in celebration of reproductive justice. It was a powerful evening, and one that gave many of us the energy we needed to keep doing this work, beyond the campaign, for decades to come, until we all are free.

The site was built in Django, with the CMS customized to be as easy as possible for the back-end user to make updates as needed and curate crowdsourced content on the Community page.

In addition to our social campaign, we designed and developed UnstoppableNow.org to house an interactive version of the campaign manifesto, alongside Unstoppable art, details on key issues, and a Community page featuring a curated selection of hashtagged posts—a source of inspiration for anyone out there who wants to speak up without fear of judgment.

The driving idea was to introduce each unique visitor to activism, one click at a time. We used the principles of progressive disclosure, never overwhelming folks with too much information at once, but nudging them, kindly but firmly, along in their journey to political activism.

From the start, our timeline was ambitious. We kicked off in March and aimed for an early summer launch to give folks ample time to explore the issues and prepare for the midterm elections.

Not only did we successfully launch in July, we created and rolled out Spanish-language materials to coincide with Hispanic Heritage month. It was an all-hands-on-deck effort that relied on every strategist, designer, producer, writer, and developer to pull their weight. And of course, November 2018 saw a record number of women elected to Congress. The data had told us the desire was there, but to see so many voters show up at the polls made every late night and weekend spent working well worth it.

We are, at our hearts, community-centered designers. We see technology not as a replacement for genuine human connections, but a conduit.

We use our time and talent to first understand what people need to feel connected and develop creative solutions for bringing them together. We start with vision and values—the unifying forces that give people something to work toward. Then we think up ways to leverage available technology—analog as well as digital—to share that vision and create spaces where people can show up courageously and find one another. That’s been part of our DNA as a creative studio since day one and will continue to drive our work for years to come.