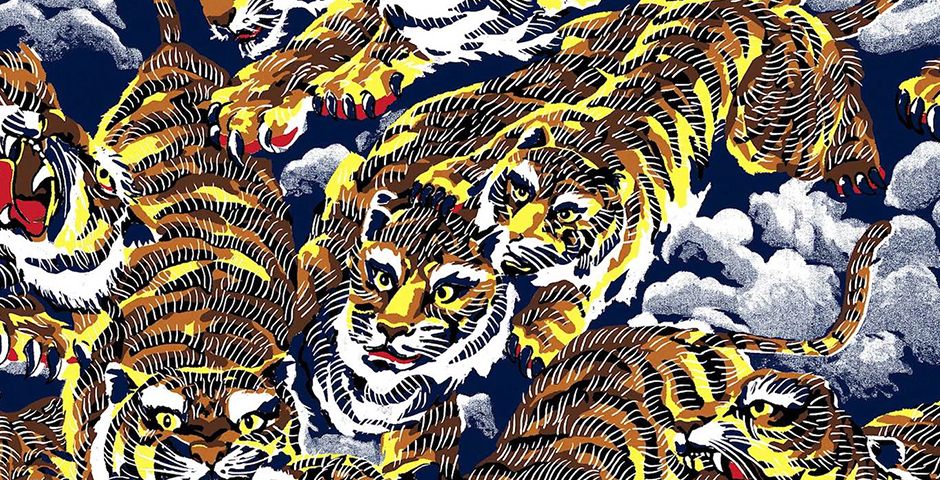 The Tiger is one of the most recognizable and inspiring animals in the world, yet most people don’t know that there are as few as 3900 wild tigers left in the wild—and these remaining tigers are threatened daily by poachers.

Rare Stripes tells the story of Humberto Leon and a team of 4 global emerging artists on a journey to create an inspiring fashion collection to create global awareness and raise funds for endangered wild tigers with the goal of doubling the world’s tiger population by 2022.

Inspired by the life stories of eight individual tigers from the wild, each garment has a QR code sewn into it which can be scanned to learn more about the real tiger that inspired the design.

There are only around 3,890 wild tigers left in the world - that’s an astonishing, shocking number. In the west at least, where we don’t have tigers, the tiger is more of a symbol than a real creature. That’s probably true in the rest of the world too. The fact that Kenzo and Tiger Beer use the symbol as an icon for their product, the goal was to give back and raise awareness of this figure and to reawaken people to plight of these living creatures. We also wanted to inform people about the efforts of the WWF to repopulate certain areas of Southeast Asia with tigers. It’s easy to become disconnected from the plight, living in urban areas and there’s an inevitable dissonance that happens.

For the film, In order to breakthrough our goal was to create a cinematic language that would be stylish but still have heart to it. The most important thing was making sure that whatever we did we were doing it in an attempt to bring the viewer closer to nature. That was the philosophy behind the approach -  how we were going to shoot it, what cameras and lenses we were going to use - everything in service of reconnecting the viewer to nature.

The first step in making Rare Stripes a reality, was to engage the three partners and artists needed to make the campaign happen. The brief had come from Tiger Beer and WWF, so that was the easy part. The hard part was engaging Kenzo and their creative directors, Humberto Leon and Carol Lim. The campaign rested on their involvement as we needed to replace Kenzo’s iconic tiger motifs and designs, with real tigers and real stories.
Luckily, the Kenzo creative leaders were passionate about our cause and working with WWF, so jumped onboard. Once we had our 4 international artists, our director, production team and multiple clients, the hard work really began.

The biggest problem we faced was bringing to life the WWF tiger stories in a visually compelling way. Some of which were gut wrenchingly hard to visualize.

One tiger, called ‘Nameless’, had been caught in a snare and left to starve. How does that become a cool motif on a Kenzo sweater?

Our artist Meryl handled this tiger’s story beautifully. Her flowing, gentle, elegant style depicts Nameless as an elegant creature. With such a stunning depiction, it takes a second for the viewer to realize the tiger is caught in a snare, about to die.

It’s only when the wearer scans the barcode that the full, heart-breaking story is revealed.

Definitely. We used a quite a few mediums and different cameras to shoot this and the idea behind that really was to create a number of contrasting points of view. Aside from this providing a level of style and flourish to the project, these different formats would all present the subject matter in different visual ways—documentary, verité, cinematic, poetic—different perspectives on the same material to create a cohesive whole. While the film conveyed the journey, creating real world merchandise with QR codes created a vehicle for the public to dive into the story and drive impact with their purchase.

It's all about connecting important stories with real world experience. Technology when done right shouldn't feel like technology, and just thought of as a tool to connect people with information and drive emotional impact.

Technology when done right shouldn't feel like technology, and just thought of as a tool to connect people with information and drive emotional impact. - Good Company Team

Video content that promotes a company or organization’s mission to improve civil and social life.