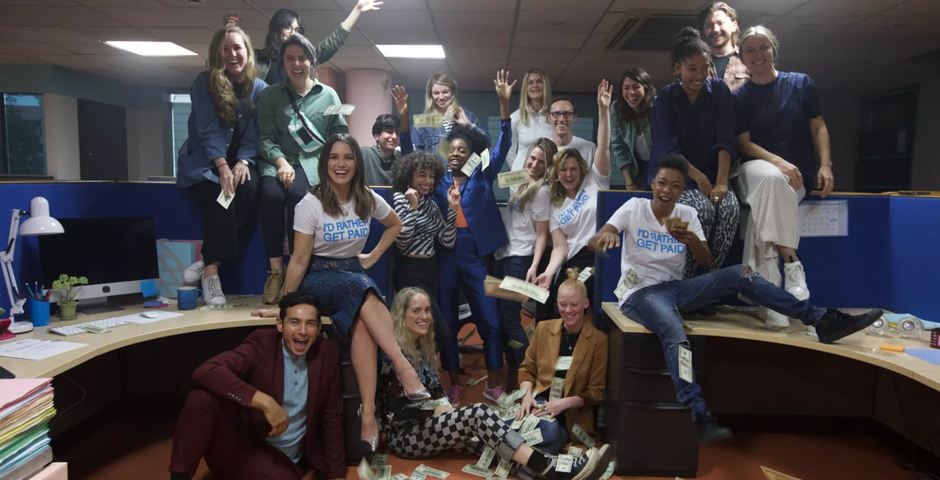 We wouldn’t say that our expectations were defied, but it’s worth reminding everyone that women remain one of the greatest untapped sources of creativity in the world. It is inspiring and amazing to see what can be accomplished when women have the power to make creative decisions and see their vision come to life. - Wieden+Kennedy Team

Pro-women gestures have come in vogue over the last few years. Brands want credit for pro-women messages. Studios want to cast pro-women heroes. Record labels realize pro-women anthems are good for society and good for business. And while those things can be inspirational to women and girls around the world, they don’t empower women nearly as much as equal pay would.

“I’d Rather Get Paid” is a song that satirizes the pro-women gestures it critiques. Yes, we appreciate the moral support. But the gesture that would make a stronger impact is paying women a fair wage.

The gender pay gap is one of the most quantifiable and atrocious biases women face in the workplace. According to the National Women’s Law Center, women will earn $590,000 less than their male peers throughout their careers, on average. The disparity is even greater for women of color. Latinas will earn $1.13 million less in their lives. Black women will earn $946,000 less.

When we started dreaming about what kind of brand film we’d want to watch that supports women, we thought, “Actually most women would probably rather get paid than watch a supportive commercial.”

The first step was creating a song that had self-referential irony without making light of a serious issue—that wasn’t overly dismissive of cultural achievements that inspire women and girls but still felt fun and entertaining. It was a very delicate balance.

The most surprising challenge was finding a cameo moment for all of the amazing women who believed in the project and wanted to be part of it. There were almost too many celebrities/influencers who wanted to be in the film! Fitting scenes for all of them into the shooting schedule was one of the biggest challenges. The other challenge was crafting a song and film that danced the fine line of both making you smile and inspiring action. But with both situations, we put our heads together, got creative, and powered through.

As a result of the campaign we saw a 7% lift in consideration for Secret and a 5% lift in favorability. During the flight dates, Twitter sentiment was 96% positive for Secret. Following “I’d Rather Get Paid,” we’ve retargeted “viewers” of the campaign on YouTube with Secret product–specific creative. Those within the retargeting list have driven view-through rates of 30%+ (the CPG benchmark is 28%). Most notably, the product spot “This Is Secret Clinical” is currently driving a 43% view-through rate (54% above benchmark), and thus creating more engagement with product work post “I’d Rather Get Paid.”

We wanted women who had spoken out on social media about the wage gap to star in our film. Then they used their social media channels to spread the word about it.

It was. We didn’t have a traditional media budget for this project, so we relied on influencers to share our work through social media.

We wouldn’t say that our expectations were defied, but it’s worth reminding everyone that women remain one of the greatest untapped sources of creativity in the world. It is inspiring and amazing to see what can be accomplished when women have the power to make creative decisions and see their vision come to life.

People share and discuss messages that surprise them. We need to challenge ourselves to say something interesting. Say something that needs to be said. And if no one is bothered by it, then what we said probably isn’t any of those things.