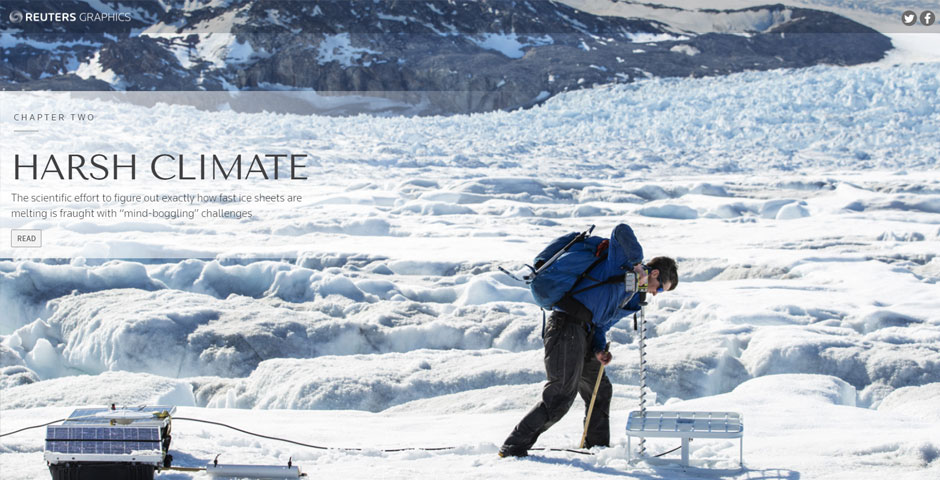 In a time when the conversation surrounding climate change has often become politicized, we wanted to reveal in rich detail and present in an accurate and accessible way the impact of climate change on Greenland - Reuters Team

Through a series of stunning photography, data graphics, video and drone footage, Reuters will unveil the science — and the scientists — involved in tracking environmental change in Greenland and show how sea level rise can impact human life.

For both journalists and scientists, climate change is difficult to document. It most often happens imperceptibly—a tenth of a degree increase in temperature, a few less inches of rain, a slowly melting ice sheet. Scientists have had the computational power to understand global warming for only a few decades, and the numbers are sobering. But where does the data come from? In a time when the conversation surrounding climate change has often become politicized, we wanted to reveal in rich detail and present in an accurate and accessible way the impact of climate change on Greenland and how the scientific effort study of it is often fraught with "mind-boggling" challenges.

It was towards the end of our photographer's trip embedding with a group of researchers on the Helheim Glacier when he managed to capture footage of a massive calving event. Over 30 minutes, a chunk of ice about a third the size of Manhattan broke apart and tumbled into the water—a mesmerizing sighting of the sea level rise and a poignant end to a months-long project examining climate change in Greenland. Such major glacial ruptures (an estimated 10 billion tons of ice were lost) are rarely observed in person and it was a breakthrough for us to be able to record that moment.

Our first step was to contact researchers and scientists who were conducting studies in Greenland and convince them to let us come along to observe their field work.

When our photographer was embedding with a group of scientists in Greenland, it rained continuously for days and nothing was happening so it was difficult to make pictures. Nevertheless, we made sure that we were set up and prepared for any movement at the glacier. Patience eventually paid off and during the end of the trip, we managed to capture a spectacular, rarely seen glacier calving.

The real-world impact exceeded our expectations. After the project was published, we received praise from the scientific community for its accuracy and Reuters was selected for a panel at this year's SXSW as a part of their "Future of Oceans" programming.

Yes. The way the project was presented and being able to break up different elements of the project so that it can be used in different ways allowed us to reach as many people and clients as possible. The presentation combined video, photos, graphics, and text in a compelling and accessible way, giving the reader a comprehensive view of how Greenland is melting and the study of climate change on the island.

This environmental project is a first of a kind for Reuters. We are delighted by the response we got from it both internally and externally. It was widely picked up by our media clients and the images and other elements continue to be used in climate stories related to Greenland. The project laid a strong foundation within the organization on how visuals and text can work together to tell in-depth stories on climate change.

We are embarking on several projects this year — from space exploration to coral reef bleaching — that will make use of different forms of technology to tell visually-compelling multimedia stories. We are heavily invested in finding new and better ways to tell complex stories and topics so that they can be more accessible to our audience.

About the Best Use of Photography category

Only photography as it's used throughout the site is judged. Geared toward sites that rely heavily on photographic imagery as a critical part of the user experience.