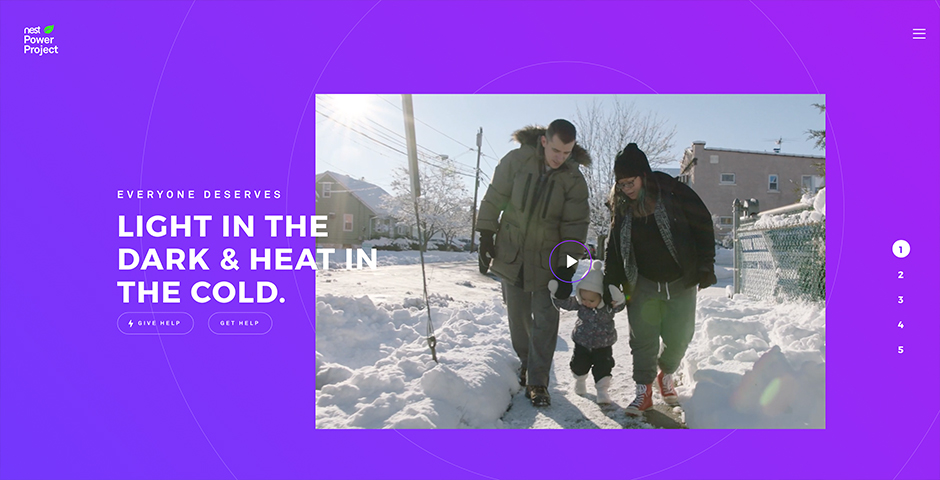 MediaMonks’ Innovation Director refers to it as "incremental innovation." For us, that basically means keeping our eyes and ears open constantly. Always looking for ways to improve and adopting new tech early on. - MediaMonks Team

We believe everyone deserves access to energy efficiency. That’s why we launched the Power Project. The Power Project aims to raise awareness of the energy burden, provide help to people struggling with high energy costs, and create a platform for people to help one another out. Over the next 5 years, Nest is committed to installing one million energy- and money-saving thermostats in homes that need them most. Additionally, we’ve donated over $800,000 to Habitat for Humanity and the United Way this year, to make a Nest Thermostat E available to every Habitat for Humanity home built or rebuilt in the U.S. Together, we can help red keep our neighbors warm — this winter and every winter.

Energy poverty in the US is an under-reported issue that affects a huge number of families — roughly 1 in 4. According to experts, energy bills shouldn’t exceed 6% of a US household’s income, however, many Americans find themselves spending between 20-50% of their income. The objective of the Power Project was to highlight America’s energy burden, neighborhood by neighborhood. Providing the 35 million Americans in dire need of help with the means and the money to pay them. We teamed up with an array of public and private partners — including Fannie Mae, Habitat for Humanity, and energy providers nationwide — and the Power Project launched on Earth Day with an ad in the New York Times.

Collecting the first donations felt like a huge breakthrough moment. A plan can be foolproof on paper but that’s no guarantee for real-life results. It’s been truly amazing seeing the concept live up to its potential. The initial success of the project has even led us to adjust the content for 2019, making the update more donation focused.

We wanted to show fellow Americans that energy poverty strikes closer to home than many might think. We realized we had to divide and conquer with a double approach: appealing to both the head and the heart. So, we started creating data-backed stories on local communities that spoke to ratio. Followed by another batch of emotional articles and short documentaries that played on people’s heartstrings.

The online platform was created through hundreds of hours of intensive data gathering over a three-month period to gain a full scope of the problem at hand. Finding the needed data for all zip codes was challenging and required extensive data mining and gathering. After finding relevant and viable data sources for different data facts, some data had to be converted from county or state-level into zip code level.

Within the first few days, the Power Project raised over $8,000 in donations. In addition, one million Nest thermostats were made available to those in need. Nest dipped into their own savings as well by donating $750,000 to aid programs and initiatives.

Consumer awareness was key to bringing this under-reported issue to light, the 250,000 visitors who visited the site within the first week helped achieve that. The project went on to earn over 400 media mentions and was shared over 3,500 times on social channels, resulting in an estimated 150 million impressions. Lastly, over 50 new business partners have reached out because they want to chip in.

MediaMonks developed the website with a combination of front-end and back-end technologies, including a vast database to show Americans how their local neighborhood is affected by energy poverty. All pages and data facts on the website can be custom shared per zip code, and has significantly helped us to generate consumer awareness.

The Nest Power Project was able to bring to light the number of Americans still living in dark and cold conditions. The project gained over 400 articles and syndications in the media with an estimated 150 million impressions. Over 50 new business partners have been in touch to see how they can help since the project has been launched and the project has been shared over 3.5k times on social media channels.

Of course, we aimed high, hoping to help as many people as possible. But in the end, it still amazed us to see our plans come to fruition and how communities, both domestic and corporate, rallied in support of fellow Americans.

MediaMonks’ Innovation Director refers to it as "incremental innovation." For us, that basically means keeping our eyes and ears open constantly. Always looking for ways to improve and adopting new tech early on. For future work, that means we have a slightly bigger toolset to work with each time, stretching the boundaries of what’s possible step by step.

Sites that showcase a company's commitment to encouraging community growth and development, and to activities and programs that benefit the environment, consumers, employees, and the public.