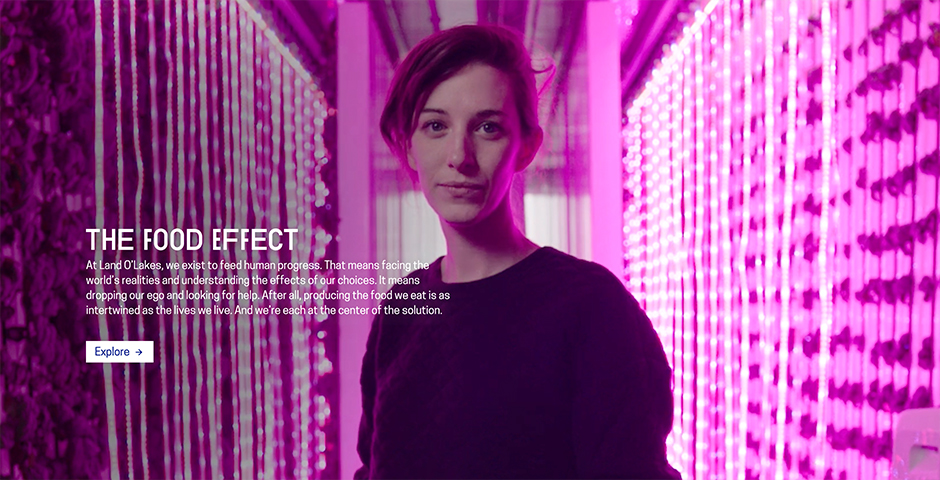 The Food Effect is a 360˚ web experience created to shed light on the fact that despite the myriad of challenges we face in terms of global food production, we are surrounded by people, ideas and technologies that are overcoming all obstacles to feed human progress. Land O’Lakes, through a partnership with National Geographic, travelled across the country to highlight how seemingly unrelated links in the food chain are all connected in their efforts to secure a sustainable food future.

Inspiring healthy dialogue about important issues is difficult in today’s world, especially when the topics, like our food system, are polarizing. We saw a unique opportunity for Land O’Lakes to connect with an engaged audience of curious learners and critical thinkers. So while other brands focused on product launches and technological feats, The Food Effect brought a variety of perspectives about the future of food to one table.

Despite the incredible strides they make towards sustainability, conventional farmers (beef producers, dairy farmers, corn growers) are often used as political footballs. They worry they’re going to be used as an example of what’s wrong with food production. Especially when featured alongside vertical farmers and algae farmers. It took a lot of reassurance for all involved that everyone had an equal, and equally relevant, seat at the table. Having Land O’Lakes initiate this conversation was key. They were able to start an open dialogue between industries and convince them that this was a worthy cause that everyone can get behind.

The first step was creating a set of interactive experiences that were broad enough to represent the current state of food production. We needed to show the pros and cons of conventional and alternative farming techniques. We needed to demonstrated the innovation and imagination being employed along every step of the way. And we needed to show how it all comes together, from farm to fork, to create positive impacts on our lives.

While on production at the dairy farm, there were some towels hanging along a rail in the milking barn. The owner of the farm (a wonderful man named Dave) hollered from the back of the set to have the towels removed. However, due to Dave’s accent, the word towels sounded like the word cows. So, when Dave says, “Get those towels out of there.” We hear, “Get those cows out of there.” Obviously, there was confusion. We were surrounded by 200 cows trying to figure out why the owner of the farm wants all the cows removed from the shot! Frustrated, Dave finally walked over, grabbed the towels, held them up and yelled “TOWELS!” We’re still laughing.

We got to see first-hand how Land O’Lakes is committed to having meaningful farm-to-fork conversations between consumers, farmers, scientists, and everyone in between. This isn’t ad agency mumbo-jumbo. Land O’Lakes is committed. And you could see the appreciation in the eyes of those we met along the way. Because Land O’Lakes doesn’t operate algae farms or vertical farms or harvest crickets for protein snacks. Yet, they genuinely want to encourage and shine a light on the best ideas, no matter where they come from. Turning people into believers that food should be a subject that brings society together, not one that drives us apart.

The main tech powering TheFoodEffect.com is Google's VR View, which allowed us to display the 360 videos. We also used the Vue.js framework to build it. But other than that, it was a relatively simple build in terms of platform/tech. We did, however, modify the VR View code to extend it and added some of our own custom functionality.

In a way, the tech chose us. We can’t think of a better way to spark an engaging and healthy dialogue about how the future of food, agriculture and technology are all around us than a 360˚ interactive experience. Because producing the food we eat is as intertwined as the lives we live. And we’re each at the center of the solution.

We went in wanting to create an experience that enlightens those who may not see the connection between our farms and tables, and erase misconceptions about modern farming practices. We ended up being a Webby for Good candidate. Not too shabby.

The question you’ve asked mirrors the philosophy of our agency: Our goal is to use technology to create inspiring, cutting-edge work that also make a difference in people's lives through any and all means at our disposal.

Sites that showcase a company's commitment to encouraging community growth and development, and to activities and programs that benefit the environment, consumers, employees, and the public.