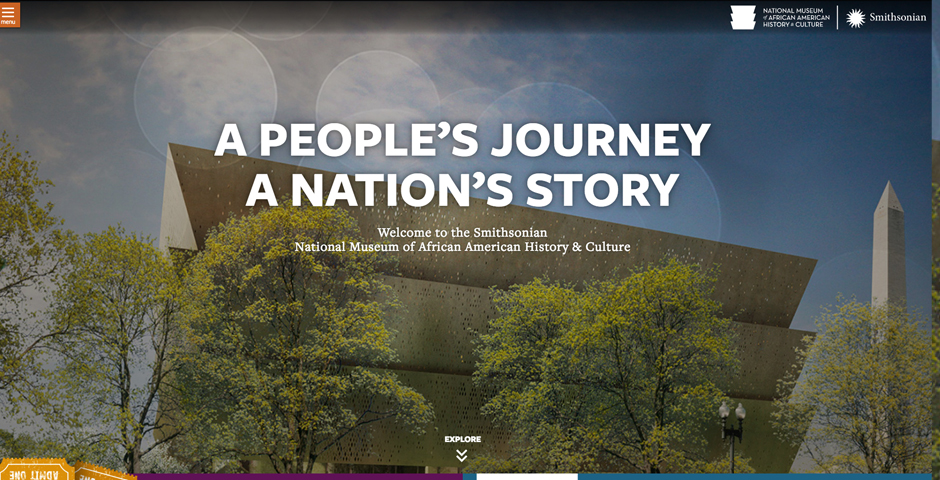 Enter by the Early Deadline on Oct. 29th

Enter Now
Back To The Winners' Gallery
Share This

Forum One partnered with the Smithsonian Institution to welcome online visitors to the new National Museum of African American History and Culture (NMAAHC), which opened in late 2016 on the National Mall in Washington, DC. As the newest museum in the Smithsonian family, the NMAAHC wanted its website to stand out with a bold visual presence befitting its physical architecture—one that goes beyond simply providing visitor information to convey a powerful and immersive virtual experience.

Given that the Museum was still a relatively new organization, managing competing priorities and stakeholders was oftentimes a challenge in developing a first iteration of the new website. Our design project was also time-sensitive, since all digital assets needed to be ready by the Museum’s opening day. We worked closely with multiple stakeholders to define a solid visual direction and in identifying user needs early on. Combined with an agile/scrum approach, we were able to prioritize and create in an iterative fashion to have a beautiful, bold-looking website ready before opening day in 2016.

Our ability to contribute to the rich African American experience and history was our biggest motivator and reward. Forum One Art Director Corey Jones said: “I have worked on some amazing projects in my career, but this was the most significant because of what it meant for us as a society, and the history it carries. The concept of an African American Museum on the National Mall has been a century in the making. This project was truly rewarding because, as an African American myself, this museum represents my heritage. Being a footnote as one contributor to its legacy is truly amazing."

The NMAAHC’s opening is the culmination of more than 100 years of work on behalf of presidents, members of Congress, historians, artists, veterans, civic leaders, and ordinary citizens to share the African American experience with all Americans through a permanent, prominent home on the National Mall. To have had the opportunity to play a role in the creation of this historical museum as the designers of its online identity is a true honor; one that pushed us to be creative in so many new and exciting ways to ensure that the digital experience for all visitors across the globe is powerful, impactful, and seamless.

We had to get ourselves in the mindset of creating a user experience that dealt with a range of emotional themes. When considering the needs of users, we had to wrap our heads about the fact that some people would never be able to physically set foot in the Museum, and the digital space had to be a suitable proxy. This led to careful considerations, from the visual approach to the technical decisions we took, to the proposed content structures. We knew we would be telling different stories to numerous communities. These conversations were among some of the most emotional and challenging we’ve had as a creative team.

What surprised all of us, of course, is just how popular the website and the museum are. People stay in the average museum for less than two hours. For this museum, the average “linger time” is about six hours.

About the Cultural Institutions category

Sites for museums, parks, zoos, gardens, aquariums, theatres, arenas and any other institutions of cultural significance.