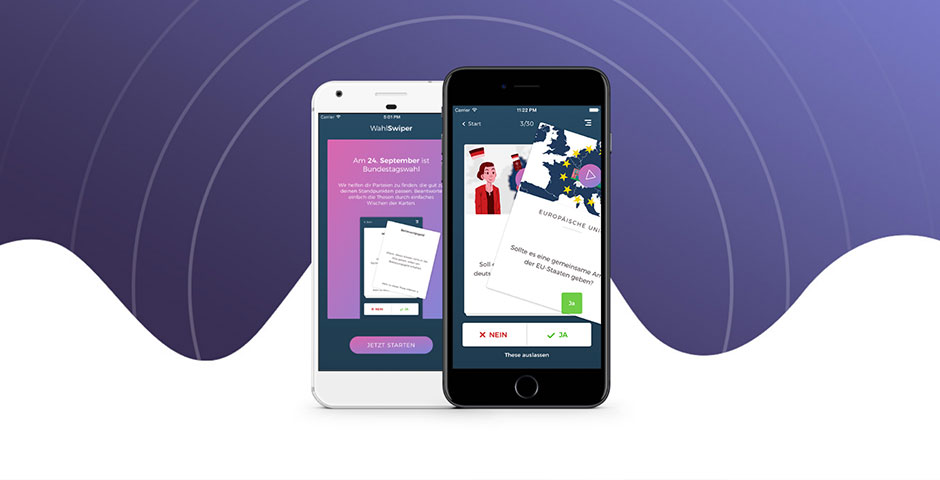 Our mission is to motivate more voters to become part of the electoral process in a simple and fun way: Swipe political theses to the left (yes) or right (no) before answers get matched with every political party. WahlSwiper provides detailed information in carefully researched short films.

We wanted to contribute to the "Bundestag" election in Germany in 2017. We were terrified by more disenchantment with politics which can be seen around the globe. Many before us fought hard to get the right to vote in a democratic election and we are sad to see that more and more don't care about elections anymore. We see democracy as one of the highest goods we have and we wanted to get people interested and engaged with the election.

We were concerned that people would not trust us as a private company. That we might share or sell sensitive data or that the questions were biased or potentially favoring a specific party. That's why we reached out to a group of political science students and a professor from the Ludwig-Maximilians-University in Munich to work with us on creating the questions for the app. They were checked on neutrality by the professor throughout the process. We also let every party fill out the questionnaire to make sure the answers were correct.

The most rewarding aspect was definitely when we got feedback from our users that we were really helpful for them. Our thinking was: If only one person more is going to go vote because of our app it was all worth it.

We wanted to get people engaged in the election and we sure did reach that goal. We never thought that our app would be so successful. We thought it was going to live in our "bubble" of people that we know and their friends but we reached many more people, over 500,000.

We targeted mainly, but not only, "first voters"—and that is, with a few exceptions, younger people. That's why we took the concept of Tinder, which many are very familiar with and made a political version out of it. It was a match made in heaven and it worked better then we imagined. As younger people mainly use their smartphone nowadays and our concept works best there, we only launched the mobile app for iOS and Android. We also launched a web version as well as an Alexa skill to make it available to a wider audience later on.

At our core, we are a team of three people. As we paid for everything by ourselves and therefore need to work on other projects to make a living, getting this project done was a major challenge itself. With only three people designing, developing, and testing an app, setting up a student group, working on the content, collecting all the answers from every party, and creating animated explanatory videos for every single question within only a few weeks was a big deal for us with many sleepless nights.

We are already working on the next version of our app which will have a lot more features and way more information about each election. We believe that using digital products to educate is the future—for every future idea we have, we will find the best possible way to get our point across digitally, be it as a website, app, via voice commands, video, or all of them together.