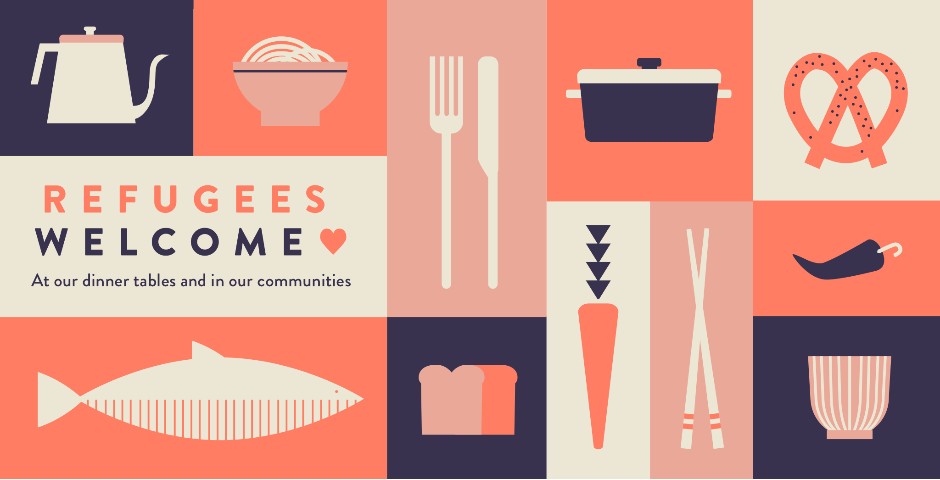 Back To The Winners' Gallery
Share This
Describe your Webby-nominated project. What’s the elevator pitch?

Refugees Welcome is a dinner series designed to bring refugees and non-refugees around a table to break bread and break barriers.

We are in the midst of largest refugee crisis since World War II. Everyday folks want to know how they can help those who are fleeing violence or persecution but sometimes those conflicts can feel distant or inaccessible. We wanted to show people that there's a way to get involved right here at home.

That the concept would feel forced or that the communities of refugees and asylum-seekers we'd be looking to engage with would feel that this series was extractive of their experiences. We controlled for this by ensuring that of the 40-50 guests at each dinner, half were newcomers and half not, so that the meals were based around an equal exchange and wouldn't feel like other events I've been to, where one refugee family was invited to attend and share their most intimate stories with a crowd full of strangers. These dinners don't mandate any recounting of personal experiences, rather guests are just there to meet people, make new friends, and most importantly, have fun.

Creating the space in which the aspiring entrepreneurs among our refugee guests could link up with investors and other business-minded advisors at the dinners we've hosted at major corporates. Those connections have led to the creation of a catering company, a coffee shop, and a desserts service, among other initiatives. I knew that bringing the right mix of people together could lead to unique and inspiring interactions, but I had not realized just how powerful a role these dinners could play beyond bringing people together socially, in also creating business and other employment opportunities that make all the difference to someone who has had to start all over again in a new country.

We launched on Valentine's Day 2017 in the hope that the day could not only be a day of romantic love, but of love for your neighbor and love for community. In a time of rising xenophobia and insularity we hoped the dinners could help break down misconceptions about our new neighbors and show them they are welcome in their new home countries. We thought the series would only last a month, tops, but the reaction from hosts was far more enthusiastic than we expected and more than a year later we've directly organized more than 100 dinners in five countries, and we're still growing.

The breakthrough moment was realizing that corporations really loved this idea and not for any standard notion of ROI. The launch of the series coincided with the advent of the travel ban in the United States and corporations were eager to sign on to the program as a way of demonstrating their values, both externally to their consumers and users, as well as internally to their employee teams. The participation of companies ranging from tech giants to brick and mortar retailers helped demonstrate the depth and reach of this concept and motivated us to keep accepting offers to host well past our initial timeline for our involvement.

Yes. While our series is centered around in-person interactions, our online toolkits helped potential hosts and guests self-organize their own dinners anywhere in the world and our growing social community helps model out to others what these dinners look like and inspire new hosts to get involved.

Our biggest challenge was to convince refugee resettlement agencies and asylum-seeker support groups to collaborate with us in bringing guests to our events. These groups are inundated with requests by well-intentioned folks seeking to help newcomers, and while the enthusiasm is wonderful, requests can be difficult to manage for understaffed, under-resourced agencies. After agency representatives attended our dinners they saw that our program was well-organized, wouldn't put any additional burden on them, and that the refugee guests in their network wanted to keep attending dinners. Since that initial outreach the program has just really built on itself through word-of-mouth.

Technology is the common thread in any of the cause work we put out into the world, mostly for its ability to organize and scale impact. In respect to refugee focused solutions, we are particularly excited about the potential uses of blockchain technologies and are digging deeper into that for future projects.