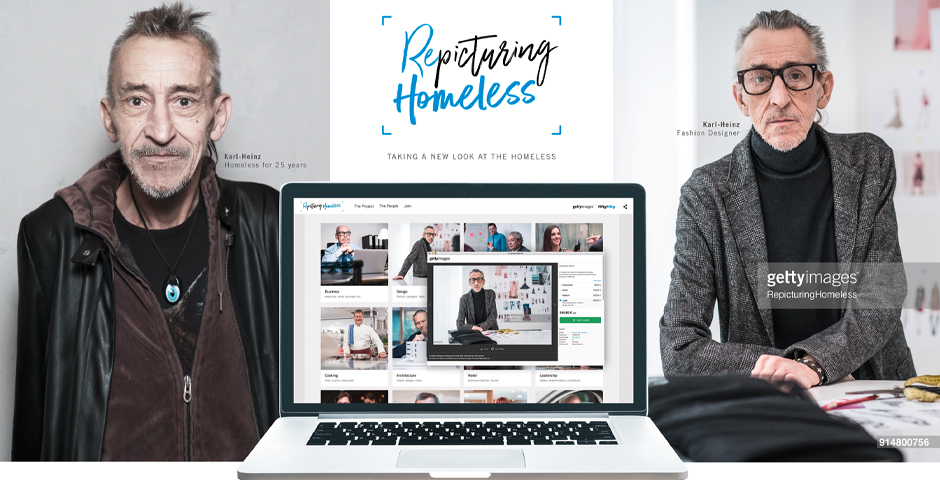 In the future, we will keep creating ideas that are rooted in human truth, and try to find the best technology or medium to help solve the problem. - Havas Germany Team

To help people repicture the homeless, Getty Images partnered with fiftyfifty, and worked with this street magazine’s homeless vendors as models for classic stock photography. We filtered out the most-searched-for motifs on Getty Images and portrayed the homeless as common people in these different life and work situations, helping others to see the homeless as who they really are: the same human beings as any one of us. The photos were uploaded to Getty Images and iStock. All profits go directly to fiftyfifty to help house the homeless. While the images are on a national exhibition tour, more photographers and homeless NGOs worldwide are joining us, turning the project into a global movement.

People always see the homeless as poor, desperate, and beyond help. Such deep-rooted prejudices further marginalized this underprivileged group and have become great barriers for them to get adequate help.

This project aimed to challenge the negative public perceptions of the homeless, and drive a narrative of hope and possibilities, while raising funds for this community in a meaningful way.

Most existing homeless campaigns simply kept reaffirming the sad, stereotypical images of the homeless, and asked people to donate out of sympathy, which only marginalized this community even more.

The ""a-ha"" moment of the project was when we realized that to create buzz by selling tragedies might not be the most helpful approach for the homeless. So instead, we tried to touch people’s heart and motivate actions by stimulating their self-reflection of commonplace prejudices, and inspiring more faith in our fellow human beings.

Once we settled on the idea, the first step was trying to find homeless people who are willing to participate in the project. We went to several monthly gatherings of fiftyfifty, where they distribute the magazines of that month to its homeless vendors. We shared the idea with the homeless people at the meetings. Many of them were very interested in being part of the initiative. We took photos of all the willing participants, and in the end found the most suitable ones for the project.

One of the biggest challenges we encountered during the project was to stay in contact with our homeless participants and ensure they would really show up on the day of the shooting, because most of them don’t have a fixed address or a phone number.

All we could do was to keep checking with the social workers from fiftyfifty, who have been working closely with the homeless participants for a long time.

The real-world impact so far has definitely met our expectation. With over 155 million reach, and over € 1.4 million earned media, we are driving a narrative of hope and possibilities for homeless people. The shift of public perceptions, and the change in how people talk about the homeless, have been evidently reflected in media coverage and online discussions about our photos.

Brands such as Lufthansa Insurance already started to purchase from our collection for commercial uses. The project has generated lots of donations so far, and the number is still climbing, with stock photography as a long-term fundraising tool.

With a beautiful twist on stock photos, we turned an established digital service into a new medium and a long-term fundraising tool.

While Getty Images began to promote our photos in their newsletter to the user community every month, we were spreading the project through various mediums: online films, social media posts, print, TVC, cinema advertising, plus a photo exhibition on tour around Germany.

Stock photos are abundant with typical scenarios of common people. We took advantage of this feature of this medium, to help the public “repicture” the homeless as the same human beings as anyone of us.

We expected the project could really shift the social narratives about homeless people, but the scale of impact it achieved in the end still surprised us.

Cities and organisations all over Germany have been sending requests to host our photo exhibition. Everywhere it visited, the exhibition became the talk of town, and a popular educational venue for local schools.

Even the President of Germany, Frank-Walter Steinmeier, applauded the project in his Christmas Letter of 2018.

As more photographers and NGOs worldwide join the intiative, more photos are being incorporated to the collection from other places of Germany, US, Hong Kong, Brazil, etc., turning the project into a global movement.

In the future, we will keep creating ideas that are rooted in human truth, and try to find the best technology or medium to help solve the problem.

About the Best Use of Online Media category