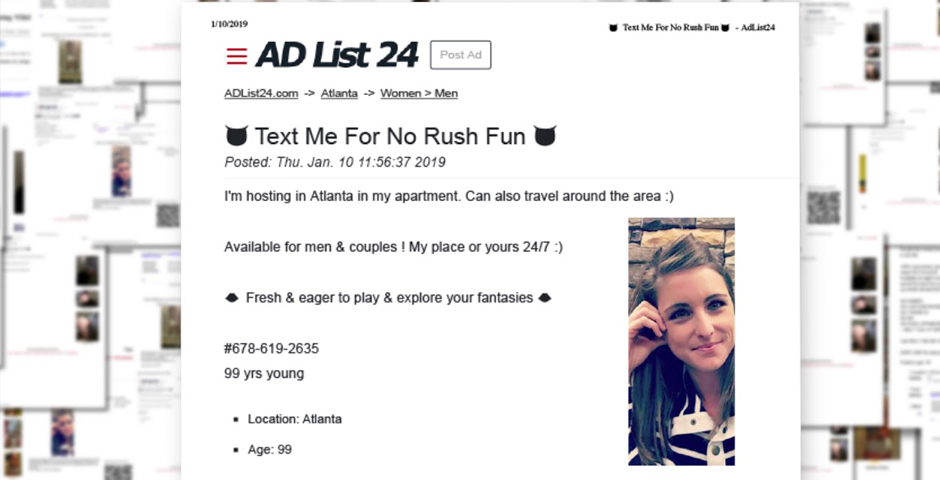 Child sex trafficking is a growing problem. The Internet makes it easier for predators, harder for law enforcement & nearly impossible to collect verifiable data. But anti-sex trafficking group Street Grace created a way to infiltrate this dark world and fight back with Gracie, an artificially intelligent online presence with more than 112 distinct personas designed to impersonate minors selling sex, intercept predators, and collect data on their behavior. Predators click on ads that we placed, leading them to a text chat with Gracie. When they solicit underage sex from her via text, Gracie sends a warning and their information to law enforcement. Lastly, she directs them to resources for help.

Online sting operations, which "out" sex traffickers and predators, have been a very successful weapon for law enforcement in fighting sex trafficking. And statistics have shown that 80% of first-time buyers do not repeat once they are outed. However, each successful intercept of a predator requires an enormous amount of man hours and money, which just isn't available. And the number of predators stopped, as well as the amount of data collected, is sadly low. Street Grace set out to find a way to accomplish the same thing but in an automated fashion that could be scaled up and exponentially increase the effectiveness of law enforcement, while collecting valuable data at the same time.

Sex trafficking is an issue that hides in the shadows. It's a difficult subject to talk about and thus, awareness of the problem is low. And with minimal data surrounding the subject, it is especially difficult to procure support from donors and politicians to fight the problem. If we can't prove that we can make a measurable difference, people will not lend their support. But Gracie was designed to not just fight the problem head on, but to collect data at the same time. Her data collection fueled the largest single verifiable study ever done on underage sex trafficking. And that gives us valuable ammunition in fighting for real policy changes and action from both donors and politicians.

We needed lots of data from authentic conversations. So we reviewed SMS transcripts from Street Grace's conversations from their previous Project Intercept efforts & transcripts from cases prosecuted by the Georgia Bureau of Investigation. We interviewed their special agents to learn about the psychology and tendencies of sex predators. To be sure that Gracie used the language of and exhibited the psychology and constraints of a typical adolescent, we gathered writing workshop samples from college students at the Savannah College of Art & Design. To ensure we collected data in the most impactful way, the Centers for Disease Control & Kennesaw State University consulted on our research design.

We had no idea about the form and structure of the conversations between a victim and a sex-buyer. Our instincts told us that the language should be seductive and flowery, but we were overwhelmed with the possibilities for how different conversations could unfold. We consulted the GBI. Special agents told us that these conversations are actually very transactional, more like scheduling an appointment. This information influenced how we designed the conversation flow for Gracie. Also, our work would be jeopardized if predators found out that Gracie was a bot. We overrode defaults and made changes for how Gracie responds when she doesn't understand users' input and how to handle belligerent users.

In just five months, Gracie has interacted with potential predators across 25 states & 78 cities, achieving undeniable results. She has exchanged 54,000+ messages, performed over 1,000 intercepts per month & has reported 6,000+ would-be predators. Gracie's therapy resource has a 9% clickthrough rate. She has also fueled the single biggest verifiable study on sex trafficking ever done, helping inspire real policy change and becoming perhaps the greatest weapon we have to fight underage sex trafficking. Most importantly, every conversation Gracie has with a predator is one less conversation a predator has with a real kid.

Digital marketing and analytics are obviously massive drivers of business results in our industry. But with Gracie, we needed to go beyond typical data analysis, to push into a completely new area. Never before has artificial intelligence been used to create such an authentic online replica of such a specific group: adolescents being trafficked for sex. And never before has a communications platform been so efficient at taking on such a difficult task.

This project wasn't just using data to locate or delineate a specific target audience. It used data to actually create an artificially intelligent online persona which could interact with a target audience of potential sex traffickers.

Gracie was also designed to collect data, logging every conversation to help Gracie become even more accurate and authentic, and gathering valuable insights
on the behaviors of potential online traffickers.

Statistics show that 80% of first-time buyers who are outed in this way never seek underage sex again. And Gracie has had a surprisingly high rate of clickthroughs, with 9% of those interacting with her clicking through to seek help. So, every interaction Gracie has potentially saves multiple lives from being ruined.

We are actively retooling and re-skilling to deliver creative technologies. Our creative teams continue to concept with our developers, UI/UX experts & the
data science and analytics team to develop other ways to help Street Grace fight child sex trafficking, as well as discovering other nonprofits that need help making a positive impact on people's lives.

About the Messaging / Bots category